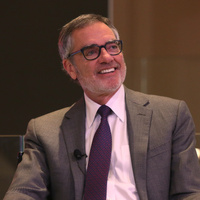 Robert Pittman net worth: Robert "Bob" Pittman is an American businessman who has a net worth of $100 million dollars. Robert Pittman was born in Jackson, Mississippi, and began working in radio broadcasting while he was still in his early teens. By the time he was in his early 20s, he was serving as an announcer for WNBC radio in New York. He founded MTV, and went on to oversee its early years. He also revamped Nickelodeon for a slightly older audience, and launched VH1 and Nick at Nite. From there, he went on to found Quantum Media, which he later sold to Time Warner. He was subsequently made President and CEO of Time Warner Enterprises. He also became CEO of Six Flags Theme Parks. He left Time Warner to become the CEO of Century 21 Real Estate, and then returned to media work, when he became the President of AOL Networks, and then America Online, Inc. He then co-founded a private investment firm called, Pilot Group, LLC. In 2010, he began working for Clear Channel, and is now the Chairman and CEO of Clear Channel Media Holdings and Executive Chairman of Clear Channel Outdoor Holdings.