Robert Gore net worth: Robert Gore was an American engineer and scientist who had a net worth of $830 million dollars at the time of his death. Robert earned fortune and fame as the inventor of "Gore-Tex". Robert Gore died on September 17, 2020 at the age of 83. He was survived by his wife Jane, several children, grandchildren and great-grandchildren. For much of his life, Robert was the richest resident of Delaware.

Born in Salt Lake City, Utah, Robert Gore graduated from the University of Delaware. He then went on to earn his M.S. and PhD in Chemical Engineering from the University of Minnesota. While still an undergraduate, he attracted widespread attention in the science community for creating a way to insulate cable and wires with PTFE tape, by stretching and expanding heated PTFE rods. The resulting product became known as Gore-Tex, a breathable and waterproof material that would go on to be used in everything from clothes to shoes, guitar strings and space suits.

Robert took the material to the company founded by his parents W.L. Gore & Associates, which already manufactured fluoropolymers. Mr. Gore's father had worked at DuPont for 16 years. He and his son created a very successful company with Gore-Tex as its base. Today the company generates nearly $4 billion per year in revenue. Robert Gore served as President of W.L. Gore & Associates from 1976 to 2000, and then served as Chairman of the Board of Directors until his death in 2020. 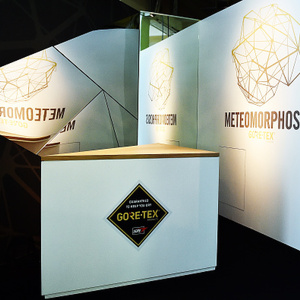