Rex Tillerson net worth: Rex Tillerson is an American energy executive, civil engineer, diplomat, and politician who has a net worth of $300 million. Rex Tillerson was born in Wichita Falls, Texas in March 1952. He graduated from the University of Texas at Austin and became general manager at Exxon USA's central production division before becoming president of Exxon Yemen Inc.

as well as Esso Exploration and Production Khorat Inc. Tillerson was elected chairman and chief executive officer at Exxon in 2006. From 2010 to 2012 he served as the 33rd President of the Boy Scouts of America. In 2017 Tillerson became the 69th United States Secretary of State under President Donald Trump. He is a Republican who made business deals between Exxon and Russian President Vladimir Putin in 2014 and was director of the U.S. and Russian oil company Exxon Neftegas. Tillerson is married and has four children. He is a member of the National Association of Congregational Christian Churches. When he agreed to become Secretary of State, Tillerson was allowed to place $180 million worth of Exxon stock into a blind trust. Furthermore, Tillerson must sell all of his privately owned shares in the oil giant, which he will then be able to re-invest in "permitted property," which is mostly mutual funds and securities. If he complies with those demands, he won't have to pay capital gains tax for the sale. 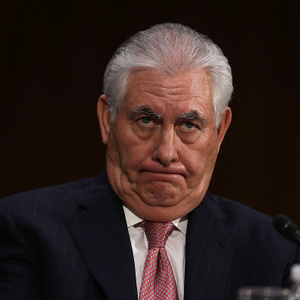