How much is Reggie Fils-Aime Worth?

Reggie Fils-Aime net worth and salary: Reggie Fils-Aime is President and chief operating officer of Nintendo of America, the North American division of the Japan-based video game company Nintendo and has a net worth of $40 million. Reggie Fils-Aime was born to Haitian immigrants, who moved to the United States due to the conflicting political views of Fils-Aime's grandparents. He graduated from Brentwood High School and was accepted to Cornell University in 1979. While at Cornell, he was a member of Phi Sigma Kappa. He earned a Bachelor of Science in applied economics in 1983. After receiving his degree, he took a position with Procter & Gamble. Following that, he took a position as Senior Director of National Marketing at Pizza Hut, where he launched the Bigfoot Pizza and The Big New Yorker. He then joined the world's Chinese food service leader, Panda Management Co., acting as Senior Vice President. Later, he came on board to VH1 as Senior Vice President. He joined Nintendo in December 2003 as the Executive Vice President of Sales and Marketing. On May 25, 2006, he became the President and Chief Operating Officer of Nintendo of America after former president, Tatsumi Kimishima. He was moved to his new role as Chairman of the Board and chief executive officer. He gained notoriety among the gaming community at the 2004 Electronic Entertainment Expo, where he introduced himself with the above quote. Many fans now know him as the "Regginator," and he is attributed with sparking a new era for Nintendo, one of improved public relations, which fans and the press dubbed the "Reggielution. On November 5, 2007, at the encouragement of marketing professor Ed McLaughlin in the department of Applied Economics and Management at Cornell University, he gave a guest lecture on Nintendo's marketing strategy targeted at gamers across a spectrum of demographics. Reggie Fils-Aime was born on March 26, 1961. 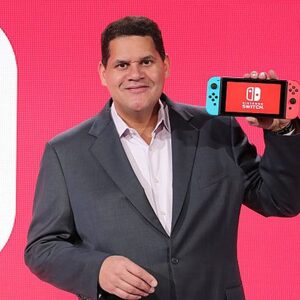