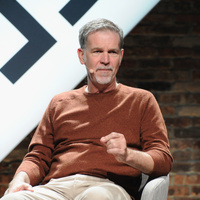 What is Reed Hastings' net worth and salary?

Reed Hastings is an American entrepreneur who has a net worth of $1 billion. Reed Hastings has earned his fortune as the co-founder, Chairman and CEO of Netflix. As of the company's most recent SEC filing, Reed owns 5.2 million shares of Netflix including options. At his peak, when Netflix stock was soaring, Reed's net worth reached as high as $7 billion.

Wilmot Reed Hastings Jr. was born on October 8, 1960 in Boston, Massachusetts. His father was an attorney for the Department of Health, Education and Welfare for the Nixon administration. After high school he spent a year selling vacuum cleaners door-to-door before enrolling at Bowdoin College in Maine. He spent summers training at the Marine Corps' Platoon Leader School with the intention of joining the Marines after graduating. Instead, the very next day after graduating he chose to join the Peace Corps. While in the Peace Corps Reed taught math in schools in Swaziland. Speaking about his time in the Peace Corps decades later, Reed would say:

"Once you have hitchhiked across Africa with $10 in your pocket, starting a business doesn't seem too intimidating."

During this time he decided to apply to graduate schools. His first choice was M.I.T., but he was rejected and instead opted for Stanford. He graduated in 1988 with a master's in computer science.

His first job after Stanford was for the oilfield services company Schlumberger. He then worked as a software developer for a company called Adaptive Technology. At Adaptive, his focus was debugging software.

In 1991, at the age of 31, Reed co-founded a company called Pure Software. The company's first product was a debugging tool for Unix/C engineers called Purify. Pure Software went public in 1995. A year later the company merged with a rival called Atria to create Pure Atria Corporation. Pure Atria was later acquired by Rational Software for $750 million. It was the largest acquisition in Silicon Valley history up to that point. On the day the deal was announced, both companies' stock dropped 40%. Hastings was named CTO of the combined new company but ended up leaving soon after the acquisition.

He had a little bit of money and nothing but time to think of his next venture. He would found Netflix the very same year as the sale to Rational Software, 1997.

According to company lore, Reed stumbled on the idea for Netflix after getting a $40 late fee at a Blockbuster rental store for returning "Apollo 13" six weeks late. One day during the six weeks when he could not locate the missing cassette, Reed went to his gym to work out. While working out it dawned on him that the gym's monthly fee model of having was much better than having to pay for something like a movie rental every time you wanted to watch a movie. He realized there should be a service where people could pay a flat rate and rent as many or as few movies as they wanted. As DVD players were becoming more common, his idea of sending movies through the mail became exponentially more viable.

Reed co-founded Netflix with Marc Randolph on August 29, 1992 in Scotts Valley, California. Randolph was the marketing director at Pure Atria and had previously co-founded a mail-order software company called MicroWarehouse. Hastings and Randolph used to commute to Pure Atria together from their homes in Santa Cruz, California and the company's headquarters in Sunnyvale.

Randolph, who left Netflix in 2002 after the company's IPO, would later offer a different version of Netflix's founding lore. According to Randolph, it was he who had the idea for a direct-to-consumer DVD rental company. He claims to have had the idea after seeing the computer software industry transition to CD-Roms and the rise of e-commerce from Amazon.com. He claims he went to Hastings wondering if and when movies switched to DVD from VHS, could they be safely rented via mail? Here is Randolph's version of the story:

"Reed and I were in downtown Santa Cruz and we were saying 'I wonder if we can mail one of these things [a DVD]. We went in and bout a music CD and went into one of those stationary stores and bought a greeting card and stuck the CD in the envelope and mailed it to Reed's house. And the next day he said 'It came. Its fine.' If there was an aha moment, that was it."

Hastings has later disputed that Randolph was heavily involved in the formation of the idea for Netflix, but Randolph is officially considered the company's co-founder.

Hastings invested $2.5 million of his own money in startup capital for Netflix.

Netflix went public in 2002 at an initial offering price of $15 per share. Netflix had a market cap of $300 million after its IPO. After taking into account stock splits, Netflix's IPO price in today's terms was equal to $1.07 per share. In July 2020 Netflix stock crossed $500 for the first time. As of September 2020 the company's market cap is $230 billion. 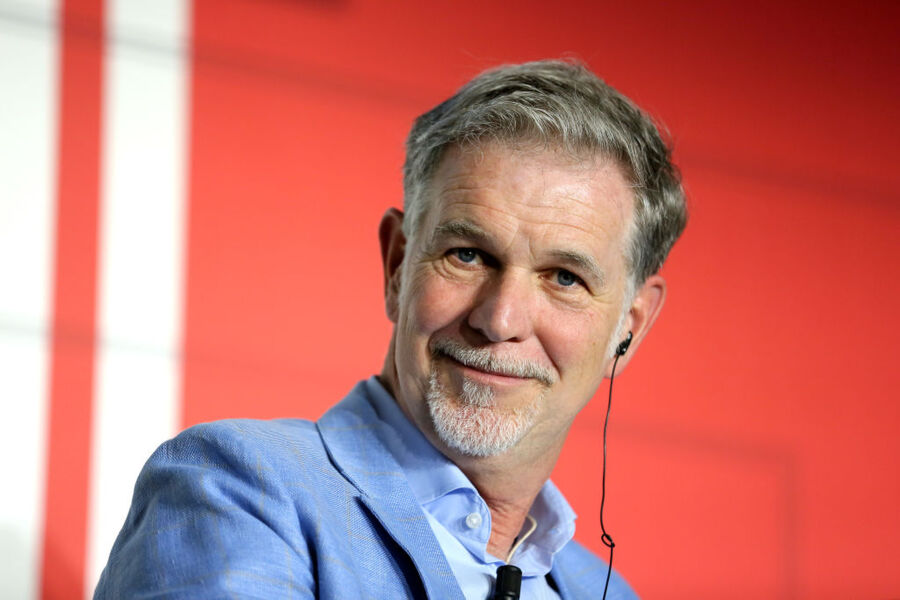 In 2000, when the company had around 300,000 subscribers and was losing money at a frightening pace, Netflix approached Blockbuster with an offer. At the time, Netflix was on pace to lose $50 million that year.

Hastings proposed that Blockbuster acquire Netflix for $50 million. If Blockbuster accepted, Netflix would change its name to Blockbuster.com to handle the online side of the rental business. Blockbuster declined. The CEO of Blockbuster, John Antioco, reportedly thought the whole offer was a joke, explaining:

"The dot-com hysteria is completely overblown. If I were to buy you what were you thinking? I mean a number."

According to Hastings, Antioco "was struggling not to laugh." Needless to say, a deal did not happen. Just 10 short years later, as Netflix's growth exploded, Blockbuster filed for bankruptcy. As of this writing Netflix has a market cap of $150 billion and nearly 200 million subscribers. Reed Hastings is arguably the most important and powerful person in the entertainment industry and in business.

Reed and his wife Patricia Ann Quillin have two children and live in Santa Cruz, California. According to public records, they paid just $1.5 million for their relatively-normal home in August 2013.

In Hollywood they own a two-story penthouse apartment in Hollywood. Reed bought the apartment in 2016 from actress Charlize Theron for $1.75 million, which was actually a full $1 million LESS than Charlize paid back in 2007.

In June 2020 Reed and Patricia donated $120 million to support America's historically black colleges and universities, colloquially known as HBCUs. The donation is the first to exceed $100 million for this cause from any billionaire individual or couple. He is the first of the Silicon Valley set to make such a generous donation towards racial justice as well.

The Hastings donated $40 million each to Morehouse College and Spelman College as well as another $40 million to the United Negro College Fund, which awards (and funds) scholarships to historically black schools.