What is Ray Kroc's Net Worth?

Ray Kroc was an American businessman and entrepreneur who had a net worth of $600 million at the time of his death in 1984. That's the same as $1.4 billion today after adjusting for inflation.

Ray Kroc passed away on January 14, 1984 at 81 years old from heart failure. He is widow Joan Kroc was worth $3 billion when she died in 2003. She gave nearly the entire fortune away to charity. At McDonald's current stock price, the Kroc's fortune would be worth $18 billion had it not been donated to charity.

Ray Kroc is best known for popularizing the McDonald's brand and helping it become a worldwide phenomenon. Under Ray's leadership, McDonald's grew from a small enterprise into the most profitable fast-food corporation on the planet. This resulted in many referring to him as the founder of McDonald's, although this has been disputed. Outside of his fast-food endeavors, Kroc served as the owner of the San Diego Padres of the MLB from 1974 until his passing in 1984.

Raymond Albert Kroc was born on October 5th of 1902 in Oak Park, Illinois. Raised in the suburbs of Chicago by Czech-American parents, Ray witnessed his family go through tremendous financial hardships during his early adult life. His father, Alois "Louis" Kroc raked in a tremendous amount of money speculating on land in the 20s, but he lost everything in the stock market crash of 1929.

During World War I, Ray Kroc lied about his age and somehow found himself working as an ambulance driver for the Red Cross at the age of 15. He rubbed shoulders with Walt Disney during this period. However, he didn't see much action, as the war ended shortly after he enlisted. Upon returning to the United States, Kroc struggled to make ends meet — especially after the Great Depression hit. During this period, he sold paper cups, worked as a real estate agent, and played the piano in various bands.

After World War II, Kroc found himself selling milkshake mixers. This eventually brought him into contact with Richard and Maurice McDonald, two brothers who had started the original McDonald's. Ray Kroc was hired as a franchise agent, and he began opening his own McDonald's locations throughout the nation. Ray eventually bought out the brothers in 1961 for $2.7 million, retaining sole control over the McDonald's corporation.

Over the next few years, Kroc revolutionized the fast-food industry, making several notable changes to the franchise model. His main goal was to exert as much control over each individual franchise location to ensure maximum consistency. All locations were kept sanitized at all times, and the menu was always standardized. The goal was to make each burger taste exactly the same regardless of the location.

He also received assistance from Harry Sonneborn his "financial wizard." Among other things, Harry helped orchestrate the buyout of the McDonald's brothers. By the time had passed away, Kroc had spread the McDonald's franchise across 7,500 different outlets in the United States. Many others existed across 31 different countries and territories. The McDonald's corporation was worth $8 billion at this point.

Kroc eventually stepped down from his leadership role at McDonald's in 1974, spending the rest of his days running the San Diego Padres. He eventually allowed his son-in-law to run the baseball team. 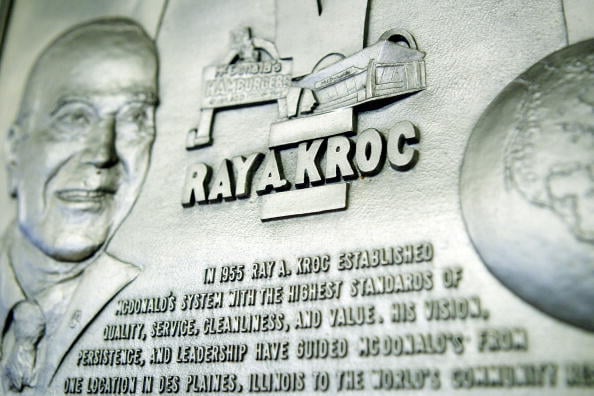 Ray first married Ethel Fleming, and their marriage lasted from 1922 until 1961. He then married Jane Dobbins Green in 1963, although this marriage also ended in divorce by 1968. He remained married to his third spouse, Joan Kroc, until his death. Over the course of her life, Joan donated a considerable amount of the Kroc estate to various charities. When Joan died in 2003, she was worth $3 billion. However, she gave almost the entire fortune away to charity when she passed away in 2003, with $1.5 billion going directly to The Salvation Army.

In 2020, it was reported that a 554-acre property once owned by Ray Croc had been listed for $29 million. Situated in the Santa Ynez Valley, the property features a circular home known locally as "the hamburger." Kroc and his wife Jane originally purchased the property back in 1965 for $600,000. This was immediately after McDonald's first hit the stock market and instantly made Kroc a millionaire. After purchasing the property, he called it the "J and R Double Arch Ranch." After building a number of impressive structures, Ray used the land for McDonald's research and as a vacation getaway from himself and his most trusted McExecutives.

However, it wasn't until the 1970s that Kroc built the famous hamburger house. This was after he had remarried. The structure is actually quite stylish and features an open space concept with extremely high ceilings. It also offers exceptional, 360-degree views of the surrounding valley with a central fire pit as a focal point for the large space.

Originally, this residence featured two stylized golden arches near the entrance as an homage to McDonald's. However, this feature was eventually removed. Perhaps the most impressive part of the property is a 17,000-square foot lodge that was originally built in the late 60s. It features a dining room with enough space to seat 100 people, plus a 3,000-square-foot great room and a 5,200-square-foot conference hall. This property was eventually listed by Joan Kroc for $14 million in 1989. She intended to donate the proceeds to charity, and the property was eventually purchased by the man who started Nature's Plus vitamins, Gerald Kessler. Kessler renamed it the Circle K Ranch, and a legal battle ensued among his beneficiaries after his passing. Kessler's widow eventually took possession of the property and listed it in 2020.