What is Peter Thiel's net worth?

Peter Thiel is a German-born American entrepreneur, hedge fund manager and venture capitalist who has a net worth of $7 billion. Peter made his first fortune as a co-founder of PayPal. Several years later he was the first outside investor in a company that was then called TheFaceBook.com. Thiel gave Mark Zuckerberg – who was by that point on sabbatical from his Sophomore year at Harvard – $500,000 in exchange for a 10% stake in the nascent social network. The investment made Thiel a fortune. Though he sold the vast majority of his Facebook shares fairly soon after the company's IPO, he still sits on the company's Board of Directors. Outside of Facebook he has poured his fortune into dozens of other investments, most notably the company Palantir.

Peter Thiel was born in Frankfurt am Main, West Germany on October 11, 1967. The family migrated to Cleveland when Peter was one and eventually settled in Foster City, California.

In the summer of 1998 a 23 year old Stanford PhD student named Max Levchin attended a lecture being given by Peter. The two struck up a friendship and soon Peter provided Max the funds he needed to launch what became PayPal. Max's idea intentionally was to build a payment system to allow payments to be sent between Palm electronics devices. Peter also eventually served as the company's Chairman and CEO.

The company leased an office space in downtown Palo Alto. By total coincidence, a rival digital payment company called X.com was leasing space on the same floor. X.com was founded by Elon Musk. Unlike PayPal's plan to facilitate payments between Palm devices, X.com was working on a system for sending payments over the fledgling World Wide Web.

As competition and venture capital fund spending increased, PayPal and X.com eventually agreed to merge. Thiel left soon after the merger was finalized and Elon Musk became CEO of the combined company which adopted PayPal as its name. In September 2000 PayPal's board ousted Elon as CEO and brought back Thiel to run the company.

After PayPal, Peter used $10 million of his windfall to launch Clarium Capital Management, an investment management and hedge fund company.

In 2003 he launched California-headquartered analytical software company, Palantir Technologies, where he sits on the chairman board. 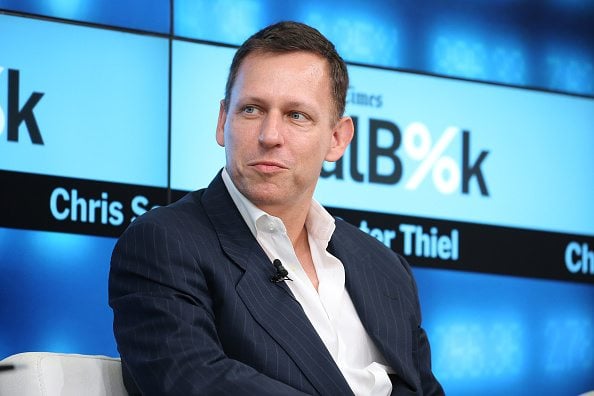 In August 2004, Thiel invested $500,000 to acquire a 10.2% stake in Facebook. He was the company's first outside investor. When Facebook went public in 2012, Thiel sold $638 million worth of his equity. In August 2012, he sold nearly all of his remaining stake for $395 million. He has also made early investments in companies such as LinkedIn, Yelp, Stripe, Quora, Yammer, just to name a few.

Thanks to his contributions to technology, entrepreneurship, and finance, Thiel has earned various recognition and awards including the one by the World Economic Forum, which honored Peter as a Young Global Leader. In addition to the above, he has been an active participant in numerous philanthropic, academic, and cultural causes. Primarily a supporter of the Committee to Protect Journalists, Peter supports the Singularity Institute for Artificial Intelligence and the medical charity SENS Foundation, as well.

Peter remains active at his alma mater, and has taught at Stanford Law School. As for his Thiel Foundation, it gives young entrepreneurs $100,000 over two years to skip college and pursue their business ideas instead. While he is encouraging students to choose business over college, Peter himself received a BA in Philosophy from Stanford University and a JD from Stanford Law School.