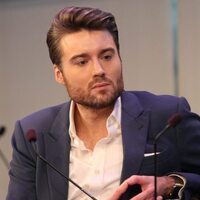 Pete Cashmore Net Worth and salary: Pete Cashmore is a European-born entrepreneur who has a net worth of $20 million dollars. Cashmore was born September 18, 1985 in Banchory, United Kingdom. Pete Cashmore is the founder and CEO of Mashable is the leading source of news, information & resources for the Connected Generation. Cashmore founded Mashable in Aberdeen, Scotland in 2005 at age 19. His passion for sharing the way web tools and social networks are transforming human interactions and reshaping cultures drove him to create Mashable. Always an entrepreneur, Pete Cashmore continued to push Mashable to evolve from a tech blog to a global media company built around technology. Cashmore now divides his time between Scotland and the United States. In 2009, Cashmore was recognized in Inc.'s 30 Under 30, Forbes' Top 25 Web Celebs and The Huffington Post's Top 10 Game Changers 2009. He writes a weekly column on technology and social media at CNN. In 2012, Cashmore made Time magazine's list of the 100 most influential people. Pete Cashmore was also crowned by INQ as the most influential Briton and most influential Twitter user in the world in 2009.   He leads Mashable's strategy and his innate sense of the web and its community, are core to the company's operations and potential growth. Pete Cashmore has been described as the "Sage of Media" and considered one of the most influential voices of his generation—on and offline.

Valuation and Sale: At its peak, Mashable raised money at a valuation of $250 million. At that value, Cashmore was worth $120 million on paper. The company then proceeded to layoff 30% of staff and "pivot to video". Unfortunately this strategy never produced a profitable business. In some years, the company lost $10 million. In November 2017, Mashable was acquired for $50 million.