Mike Ilitch net worth: Mike Ilitch was an American entrepreneur who had a net worth of $4 billion at the time of his death in 2017. Mike Ilitch was born in Detroit, Michigan in July 1929. Ilitch was the owner and founder of Little Caesars Pizza and also owned the Detroit Red Wings and Detroit Tigers. After high school he served in the U.S. Marine Corps for four years. He played minor league baseball for the Detroit Tigers in the 1950s. A knee injury forced him to retire. In 1959 Mike and his wife Marian started Little Caesars Pizza Treat in Garden City, Michigan. The family established Ilitch Holdings, Inc. in 1999. Mike would eventually be listed on the Forbes 400 Richest Americans list.

Ilitch was formerly involved with the Detroit Caesars of the American Professional Slow Pitch Softball League. He and his wife purchased the Detroit Red Wings of the National Hockey League in 1982 for $8 million. The team won the Stanley Cup in 1997, 1998, 2002, and 2008. In 1992 Ilitch purchased the Detroit Tigers of major League Baseball from the founder of Domino's Pizza. Ilitch started the Detroit Drive of the Arena Football League in 1988. The team made the Arena Bowl each of the six years they played. In 1992 Ilitch sold the team and they relocated to Massachusetts. In 2003 Ilitch was inducted into the Hockey Hall of Fame and into the United States Hockey Hall of Fame in 2004. Mike and Marian had seven children together. Their family was presented the key to the City of Detroit in 2008. Mike Ilitch also owned the Fox Theatre and Olympia Entertainment. Mike Ilitch died on February 10, 2017 at the age of 87. 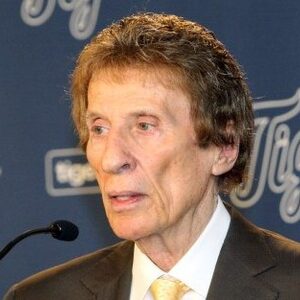