Mike Helton net worth: Michael Helton is the president of the National Association of Stock Car Auto Racing, NASCAR and has a net worth of $35 million. Michael Helton earned his net worth as a sports director and management. After graduating from John S. Battle High School in Washington County, Virginia, where he was senior class president, he attended King College in Bristol, Tennessee.

He majored in accounting and minored in math displaying an aptitude for numbers. He was awarded an Honorary Degree from King College in May 2000. After college, he worked as an accountant plus supplemented his income by refereeing football and basketball. His motor sports management experience began in 1980 at what was then known as the Atlanta International Raceway (now the Atlanta Motor Speedway). He was promoted to general manager in 1985 before joining the management team at Daytona International Speedway in 1986. Eighteen months later, he became general manager of the Talladega Superspeedway. He quickly advanced to vice president of the International Speedway Corporation. In 1989, he was promoted to president of the Talladega track. He held that position until January 1994, when he relocated to Daytona Beach, Fla., to become the new vice president for competition. He was named senior vice president and chief operating officer, in February 1999, and became the first person outside the France family to manage NASCAR's day-to-day operations. A year later, Helton was named President of NASCAR and sits on its five-member board of directors. NASCAR signed a new network television deal near the end of 1999. NASCAR's premiere event, the Daytona 500, was the first race broadcast under that deal in 2001. On race day he occupies an observation point referred to as "control" where he and NASCAR officials observe the events. Rulings are made by this group to maintain the integrity of the sport. Michael Helton was born in 1953 in Virginia. 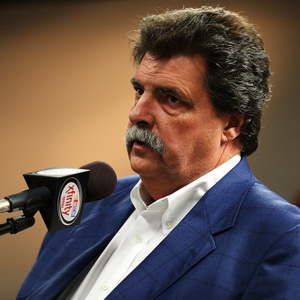