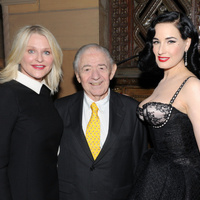 Martin Trust net worth: Martin Trust is an American businessman who has a net worth of $600 million dollars. Martin Trust graduated from the Cooper Union for the Advancement of Science and Art with a degree in Mechanical Engineering. He went on to serve as an associate professor at the Lowell Technological Institute, which is now part of the University of Massachusetts – Lowell. He also served on the Visiting Committees of multiple medical facilities, including the Dana-Farber Cancer Institute, Massachusetts General Hospital, and Harvard Medical School. In 1970, he shifted his focus and founded MAST, which became one of the world's largest international apparel producers. He later sold MAST to The Limited Stores, Inc., now known as Limited Brands. He remained on their Board of Directors through 2003. In 2001, he founded Brandot International, Ltd., and continues to serve as President of the company. He is also the Director of Virtusa Corporation, served as the cleared advisor to the United States Department of Commerce, and was on the Board of Directors for Staples, Inc., from 1997 to 2009.