What is Martha Stewart's Net Worth?

Martha Stewart is an American entrepreneur and television personality who has a net worth of $400 million. She has earned her net worth through a business conglomerate which includes TV, magazines and home products. At the peak of her career, which also happened to be the peak of the dotcom bubble, Martha Stewart Living Omnimedia had an explosive IPO. On the day her company went public, Martha Stewart became the first American self-made female billionaire ever. Unfortunately over time, after the bubble burst, the company's market cap dropped by more than 50%. More on this later in this article.

Martha Helen Stewart (née Kostyra) was born in Jersey City, New Jersey, on August 3, 1941. She is the second of six children form to Edward and Martha Ruszkowski Kostyra. The family moved to Nutley, New Jersey, when she was three years old. Stewart graduated from Nutley High School, and continued her education at Barnard College of Columbia University. She worked as a model when she was a teenager, featuring in television commercials for Unilever and Tareyton. She also modeled during college, supplementing her income by working with clients like Chanel. It was while in college that she met Andrew Stewart, a Yale Law School student. They married in July 1961, and she graduated from Columbia in 1962 with a double major in History and Architectural History.

Stewart learned about cooking and sewing from her mother, and about gardening from her father. She further developed these skills, learning new processes like canning and preserving, when she visited her grandparents in Buffalo, New York.

Stewart began working as a stockbroker in 1967, which was her father-in-law's profession. She moved with her husband to Westport, Connecticut, where the couple purchased and restored an old farmhouse. Stewart then embarked on a series of jobs and projects, including her own catering business and being the manager of a gourmet food store. In the meantime, her husband Andrew had become the president of New York City publisher Harry N. Abrams, Inc. He contracted Stewart's catering company to cater a book release party, which was where she was introduced to Alan Mirken, the head of Crown Publishing Group. Mirken, greatly impressed by Stewart's cooking and hosting abilities, developed a cookbook with her. Her first publication was "Entertaining" (1982), ghostwritten by Elizabeth Hawes.

Stewart signed with Time Publishing Ventures in 1990, with a deal to develop a new magazine under her name. The first issue of "Martha Stewart Living" in late 1990, and had an initial rate base of 250,000. Stewart also served as editor-in-chief. A show named "Martha Stewart Living," which was based on her magazine, began airing in 1993. The initial format of the show was a weekly half-hour program, but it expanded to a full hour in 1999 and ran until 2004. 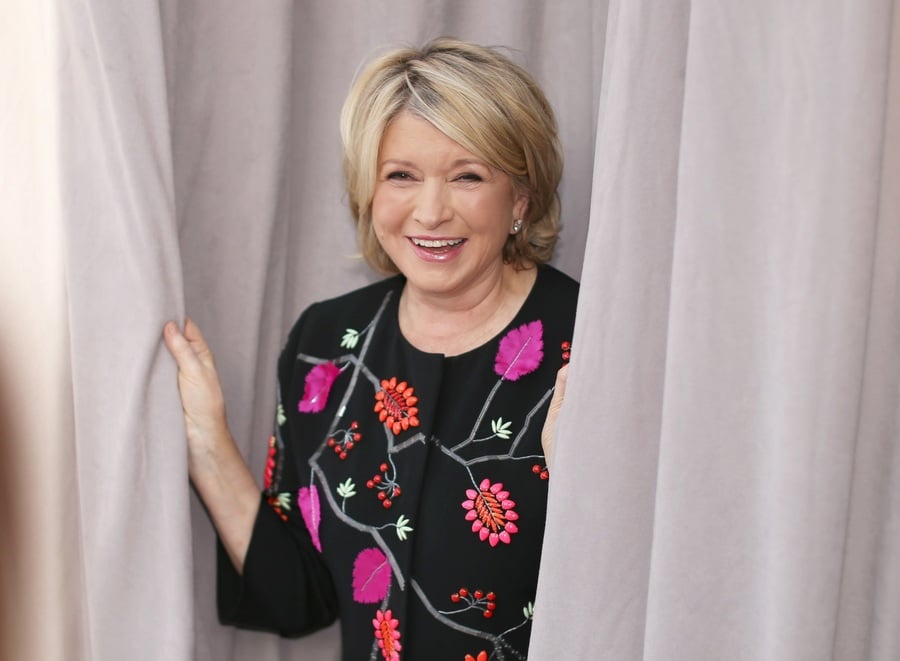 With her business partner Sharon Patrick, Stewart secured funding in September 1997 to purchase all of the television, print and merchandising ventures related to the Martha Stewart Brand. These ventures were all consolidated into the company Martha Stewart Living Omnimedia (MSLO), with Stewart as chairwoman, president and CEO, and Patrick as COO.

On October 19, 1999 MSLO went public on the New York Stock Exchange under the ticker symbol MSO. The stock opened at $18 per share. By the end of trading, prices had gone up to $38 per share, making Stewart an instant-billionaire on paper. The success made Martha the first female, self-made billionaire in the United States. Her net worth was $1 billion, which is the same as around $1.6 billion today after adjusting for inflation.

However, by February 2002 the stock price had gone down to $16 per share, causing her to lose billionaire status.

In 2001, according to the SEC, Stewart avoided a loss of $45,673 by selling all 3,928 shares of her ImClone Systems stock after receiving insider information from her broker at Merrill Lynch. She received the alleged tip while flying on a private jet and made the trade before landing.

On June 4, 2003, she was indicted by the government on nine counts, including securities fraud and obstruction of justice. Subsequently, she stepped down from her position as CEO and Chairwoman of MSLO.

Stewart was found guilty in March 2004 of felony charges of conspiracy, obstruction of an agency proceeding, and making false statements to federal investigators. She served five months in prison in 2004 and had a two-year period of supervised release. She also paid a fine of $30,000.

Interestingly, the price of MSLO stock doubled during her prison stay, temporarily restoring Martha's billionaire status. Unfortunately, in the six months after her release, the stock gains retreated by 47%, reducing Martha's net worth back down to $500 million.

Following her release from prison in March 2005, Stewart launched a highly publicized comeback, and was soon successful again. She returned to daytime television with "The Martha Stewart Show," which ran from 2005 to 2010 for five seasons. The show received six nominations at the 33rd Daytime Emmy Awards in 2006. It moved to the Hallmark Channel in 2010, where it ran for two more years under the name "Martha." She also released several books, including "Martha Stewart Baking Handbook" (2005) and "Martha Stewart's Homekeeping Handbook" (2006). Other business ventures she launched include an upscale line of homewares for the department store Macy's, a 24-hour satellite radio channel with Sirius, a line of carpet tiles launched with FLOR, Inc., and the Martha Stewart Vintage wine brand with E & J Gallo Winery, just to name a few.

Stewart was previously married to Andrew Stewart from 1961 to 1990, and the couple share daughter Alexis. She has been romantically linked to actor Sir Anthony Hopkins, and billionaire Charles Simonyi.

Perhaps not surprisingly, Martha owns a number of homes around the country. Her property portfolio alone is likely worth north of $100 million.

In 1997 she bought a 67-acre estate in Seal Harbor, Maine called Skylands that was originally built in 1952 for auto heir Edsel Ford. The pink driveway leads to a 12-bedroom home. In 2015 she bought the 7-acre property next door for $5.8 million.

In the town of Katonah, New York, Martha owns a 152-acre estate that she calls Cantitoe Corners.

In Easthampton, New York Martha owns a one-acre oceanfront property that she acquired in 1991 after her divorce from Andrew Stewart. In September 2021 Martha sold this home for $16.5 million.

In New York City's West Village Martha owns multiple units in a building on Perry Street. Martha herself reportedly no longer lives at any of her units, but her daughter Alexis is still an occupant. Speaking of Alexis Stewart. In February 2019, Alexis put a different multi-unit apartment complex covering more than 9,000 square-feet on the market for a mouth-watering $53 million.

Martha owns a second condo in NYC, this one on Fifth avenue with views of Central Park.