Being a leader and chairman of the group, she decided to sell the company's energy trading business in October 2012. Furthermore, Margarita raised capital on the public markets for the first time in the history of the 160-year-old firm, thus issuing $350 million in bonds on the Singapore market. Reportedly, she plans to spend around $7 billion on acquisitions over the next five years. Furthermore, she seems to be preparing her three children to join the multinational trading group, which is present in 53 countries. According to recent reports, she has put her twins, Kyril and Mauric, in boarding school in Singapore. While her eldest son, Eric, he had an internship at a competing firm called Glencore. Margarita married Robert in 1992, after they met on a plane in 1988. Both of them entered marriage for the second time. Margarita's cousin by marriage is Seinfeld actress Julia Louis-Dreyfus. Margarita's late husband Robert's first cousin was Julia's billionaire father Gerard Louis-Dreyfus. 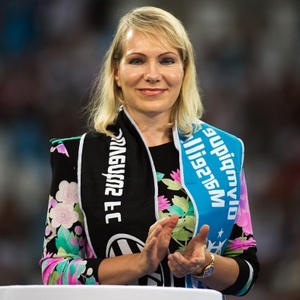