Marcelo Claure Net Worth: Marcelo Claure is a Bolivian entrepreneur, businessman, and CEO who has a net worth of $900 million. Born in 1970 in La Paz, Bolivia, Marcelo Claure grew up in the Dominican Republic and Guatemala before studying at Massachusetts' University of Lowell. In college, he earned his economics and finance degree from nearby Bentley University in 1993.

Claure then went back to his hometown in Bolivia, where he began working in the marketing field with the Bolivian Football Federation. After that phase of his career came to an end, he eventually moved back to the United States two years later to buy a cell phone company called USA Wireless. Claure sold the business within a year and started working for Small World Communications before too long. Then in 1997, he moved down south to Florida where he founded Brightstar, a wireless service provider and distributor, in the city of Miami. From that relatively modest beginning, Brightstar soon exploded in popularity and success, and the brand soon went international with branches in a variety of countries. Today, the company exists in more than 50 countries and is considered to be one of the biggest privately held businesses in the U.S., according to financial magazine "Forbes". In August of 2013, Claure agreed to become the CEO and President of rival company Sprint, where he sat on the board of directors since the beginning of the year. Claure went on to help create the One Laptop Per Child campaign that attempts to distribute low-cost laptops to the world's most disadvantaged children to help jumpstart their education. He is a member of the Ernst & Young's Entrepreneur of the Year Hall of Fame and is frequently considered to be among the world's top Hispanic entrepreneurs. Claure has been married to his wife, Jordan Engard, since 2005. They have two children together. 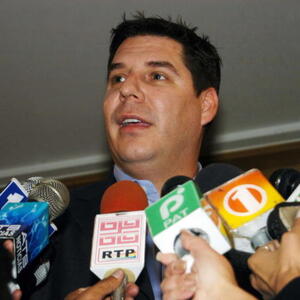