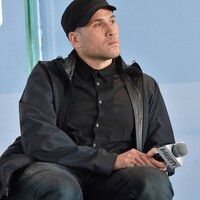 Marc Ecko net worth: Marc Ecko is an American fashion designer, entrepreneur, investor, and artist who has a net worth of $100 million dollars. Marc Ecko was born Marc Louis Milecofsky in Livingston, New Jersey in August 1972. He is best known as the founder and Chief Creative Officer of Marc Ecko Enterprises which is a global fashion and lifestyle company. He has a twin sister named Marci. He created and marketed t-shirts in his parents' garage as a teenager. He attended Rutgers University's School of Pharmacy. He started ecko UNLTD in 1993 as a t-shirt company. Early on he had clients such as Spike Lee and Chuck D. and was featured on Good Morning America. He adopted a rhinoceros logo and expanded to urban clothes and accessories for men, women, and children. In 2002 Ecko founded the men's magazine Complex. He was the youngest designer to be appointed to the Board of Directors of the Council of Fashion Designers of America. He married Allison Rojas in 2000 and the couple has three children. He started the non-profit Sweaty Equity Education in 2004. His book Unlabel: Selling You Without Selling Out" was released in 2013.