Marc Benioff Net Worth and Salary: Marc Benioff is an American businessman, author, and philanthropist who has a net worth of $9.7 billion dollars. Benioff is best known as the chairman, founder, and CEO of Salesforce. Salesforce is one of the most successful and profitable cloud computing companies in the world, and it rakes in over $17 billion per year in revenue. Fun fact: Marc's distant cousin David Benioff is the genius behind the Game of Thrones HBO show. They share the same grandfather.

Early Life: Marc Russell Benioff was born on September 25th of 1964 in San Francisco, California. Raised in a Jewish family with a long-established roots in the San Francisco Bay Area, Benioff attended the University of Southern California after graduating from high school. Eventually, he received a Bachelor of Science in business administration. Marc's second cousin is David Benioff, the showrunner and producer behind the "Game of Thrones" series.

Despite studying business administration at university, Marc became passionate about programming from an early age. During his high school years, he began selling applications and video games. At the age of 15, he established Liberty Software and created a number of successful video games for the Atari 8-bit. By the age of 16, he was earning royalties of over $1,500 per month – which was more than enough to pay for his future college education.

Career: While he was still at USC, Benioff worked as an intern for Apple Computer. After graduating, he spent 13 years at Oracle Corporation in a variety of executive positions, eventually becoming extremely successful. Although he was promoted through the ranks in a rapid fashion, Benioff eventually founded Salesforce in 1999. At this point, he was living in a rented apartment in San Francisco. Marc was one of the first people to see the potential of SaaS or "Software as a Service."

Early marketing slogans for Salesforce included "The End of Software." He created the term "platform as a service," and today it seems as though many of his predictions have been verified. Cloud computing is indeed becoming the norm for many businesses, and it is a trend that is expected to continue well into the next few decades. Aside from his exploits in big tech, Benioff and his wife Lynn have also ventured into the world of media, purchasing "Time" for $190 million in 2018.

Salesforce Numbers: In 2015, a report stated that businesses were projected to spend at least $106 billion on SaaS products in 2016. Salesforce definitely benefits from this cloud computing rush, and in 2015 the company ended the fiscal year with $5.37 billion in revenue. At the time, surpassing the $5-billion revenue mark was considered a major achievement for a cloud computing company. Soon after this achievement, Marc bragged that Salesforce would eventually double that figure, becoming the fastest enterprise software company to surpass $10 billion in revenue. Benioff also claimed that he had $9 billion already under contract.

Shares: Marc owns 4% of Salesforce as of this writing. The company currently has a market cap north of $120 billion. With these sums in mind, it seems clear where the majority of Benioff's net worth comes from. As of 2020, he had sold approximately $1.5 billion worth of stock over the years.

Acquisitions: Benioff has accelerated his own net worth and the success of Salesforce with a number of notable acquisitions over the years. Perhaps one of Salesforce's most important acquisitions came in 2013 when it purchased the email marketing company ExactTarget for a cool $2.3 billion. One year earlier, Salesforce acquired Buddy Media for $689 million. Just a few months later, Salesforce completed another purchase, acquiring the Canadian company Golnstant for $70 million.

Of course, Salesforce has also been on the other side of the auction block in the past. Microsoft has been trying to purchase the company for many years, and the titanic computer company once made a bid of $55 billion to acquire Salesforce. Intent on cashing on Salesforce's success, Benioff refused to budge and demanded at least $70 billion for his company. Microsoft eventually walked away, and the deal fell through. Marc has been famously critical of Microsoft in the past – especially in terms of the company's former CEO, Steve Ballmer.

Real Estate: As you might expect from someone of Benioff's net worth, the entrepreneur has amassed an impressive real estate portfolio over the years. One of his most notable properties is a massive compound on the big island of Hawaii. The estate features six bedrooms and almost 10,000 square feet of living space. Marc initially purchased the raw land in Hawaii for $12.5 million in 2000 before spending years designing and building the residence from the ground up. Benioff even created his very own construction company solely for the purpose of building his home.

Of course, Marc also maintains a real estate presence in "big tech" cities like San Francisco. He is said to own a $28-million mansion on San Francisco's Billionaire Row, an ultra-exclusive neighborhood in the Pacific Heights area that consists of just 10 homes. Marc also reportedly purchased a 15,858-square-foot house for $27 million in 2005 – also in the "big tech" empire of Southern California.

Philanthropy: Marc is a well-known philanthropist who has made incredible donations to various organizations and charities. In total, he has donated approximately $250 million to an initiative to create a brand new children's hospital with the University of California at San Francisco. In 2020, Benioff pledged $100 million to the UCSF Benioff Children's Hospital.

In addition, Marc is credited with popularizing the so-called "1-1-1 model" of philanthropy. With this approach, startups donate 1% of their equity, 1% of their products, and 1% of their employees' time to charity. Although it started with Salesforce, many other companies have adopted this model, resulting in significant benefits for various charity groups. Google is one of the most notable companies that have adopted this model. Benioff runs a separate philanthropy wing of his company called the Salesforce.com Foundation, and it has an annual budget of about $20 million. 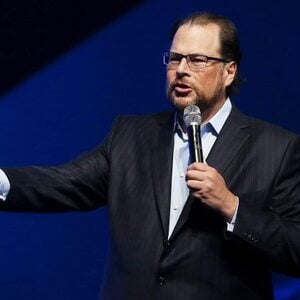