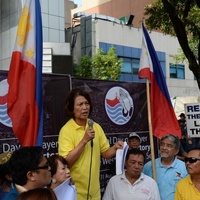 Loida Nicolas-Lewis Net Worth: Loida Nicolas-Lewis is a Filipino-born American businesswoman who has a net worth of $600 million dollars. Loida Nicolas-Lewis was born in Sorsogon City, Sorsogon, Philippines in 1942. She attended St. Agnes Academy and graduated cum laude from St. Theresa's College, a private, Roman Catholic women's college in Manila, Philippines. Lewis earned a law degree from the University of the Philippines College of Law in 1960, and was admitted to the Philippine Bar in 1968. Nicolas-Lewis met her husband-to-be Reginald F. Lewis on a blind date in New York in 1968, and married in 1969 in Manila. In 1974, Lewis was the first Asian American to pass the American Bar without having been educated in the United States. She worked for the Law Students Civil Right Research Council in New York in 1969, Manhattan Legal Services from 1970-3, and as an attorney for the Immigration and Naturalization Services from 1979-90. Reginald Lewis acquired Beatrice International in December 1987 in a $985 million leveraged buyout, creating the largest African American owned company in the United States. Loida Nicolas-Lewis served as Chair and CEO of TLC Beatrice International, a $2 billion multinational food company with operations all across Europe, from 1994-2000. She assumed the leadership of one of the largest companies in the U.S. after the death of her husband, the African-American Wall Street financier Reginald F. Lewis.