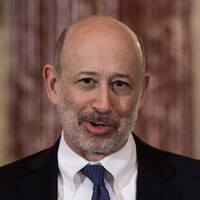 Lloyd Blankfein Net Worth and Salary: Lloyd Blankfein is an American finance executive who has a net worth of $1 billion. Blankfein is probably best known for acting as the senior chairman of Goldman Sachs, a position he has held since 2019. Prior to this, he was acting as chairman and chief executive officer from 2006 to 2018. Lloyd has been with Goldman Sachs for many years, and he first gained prominence in the corporate hierarchy after becoming the chief operating officer (COO) in 2004.

After graduating from Harvard University, Blankfein went into private law practice for a short time. Before long, he started working in the precious metals industry as a salesman. The small firm he worked for was eventually acquired by Goldman in the early 80s, which began Lloyd's connection with the company. During the 90s, Blankfein led Goldman's currency and commodities division. This helped him cement his position as a leading force within Goldman Sachs.

Lloyd's reign was not an easy one, as the financial crisis of 2008 almost immediately after he became CEO. His methods for handling this challenge made him a divisive figure in the media, the business community, and the public. As many other investment banks and firms went bankrupt during this period, Blankfein undercut the competition and established Goldman Sachs as the second-largest investment bank in the nation. He relied on historically low interest rates to accomplish this feat. Lloyd Blankfein has been called one of the most influential people on the planet.

Early Life: Lloyd Craig Blankfein was born on September 20th of 1954 in The Bronx, New York City. Raised in Brooklyn by working-class parents in a Jewish family, Blankfein graduated valedictorian from high school in the early 70s. He then attended Harvard College and earned an A.B. in History. Lloyd moved on to Harvard Law School and received a J.D. degree by the late 70s. Immediately after graduating, he worked for several law firms. However, he quickly gravitated towards the commodities industry and worked as a precious metals salesman in London. This firm was eventually acquired by Goldman Sachs.

Career: When this precious metals firm was acquired by Goldman Sachs, Blankfein started working for the company. In the 90s, Lloyd was given leadership over the company's currency and commodities division amidst a changing leadership structure at Goldman. Henry Paulson was the new leader of the company, and he mentored Lloyd to become his successor. Despite the fact that he wasn't the highest-ranking executive at the company, it was assumed that he would take over at the company after Paulson stepped down.

In 2004, Blankfein became president and COO. This position would last just two years before he was promoted once again to chairman and CEO. During his time as COO, he oversaw the commodities boom during the 2000s. Paulson stepped down after he was chosen by George W. Bush to serve as the US Secretary of the Treasury.

Almost immediately after Blankfein became CEO, he was faced with overcoming the 2007-08 financial crisis. Although Goldman Sachs was heavily involved with the practice of subprime mortgages that led to the crisis, Lloyd was able to survive a period that saw the Lehman Brothers and many other high-profile investment banks completely collapse. Goldman was bailed out by the government, and Blankfein used low interest rates to destroy his competition. Goldman Sachs subsequently became the second-largest investment bank in the United States.

Some controversy arose after Blankfein testified before the Financial Crisis Inquiry Commission in 2010. He claimed that even though he was selling financial products that Goldman Sachs was actively betting against, he had no moral or legal obligation to inform his clients of this fact. Eventually, the controversy melted away – much in the same way as it had for many high-profile bankers who were accused of causing the financial crisis.

Salaries: Blankfein is one of the highest-paid executives on Wall Street and regularly earns over $50 million per year in salary and bonuses alone. He also owns a significant number of Goldman equity. His massive salaries are an additional source of controversy in the media and among the public. In 2006, he was paid a base salary of $600,000, although the total amount blossomed to almost $54.5 million with additional bonuses. This made him the highest-paid executive on Wall Street. However, these would prove to be his highest-earning years. After the financial crisis, Lloyd personally advocated for different compensation standards in the financial industry, and he led by example. From 2014 onwards, his net salary has been in the ballpark of $23 million per year.

Real Estate: In 2012, it was reported that Lloyd had acquired an estate in Bridgehampton. The 7.5-acre estate set Blankfein back $35.5 million. The house itself features 8,000 square feet of living space. Outside, there is a pool and a tennis court.

In 2016, it was reported that Lloyd had finally sold his home in the Hamptons after first listing it 2007 for $14 million. Content to wait almost ten years, Blankfein was able to sell the residence for a final selling price of around $13 million. At one point in 2015, the home was listed for a peak amount of $17 million. Lloyd initially purchased the property in 1995 before commissioning a well-known architect to complete the mansion. Construction was completed in 2001, and the residence features seven bedrooms, a heated pool, and tennis courts.