Leslie Blodgett Net Worth: Leslie Blodgett is an American businesswoman, CEO, and entrepreneur who has a net worth of $400 million. Leslie Blodgett studied at Oswego State and later the Fashion Institute of Technology. She has worked primarily in the skin care and cosmetics industry, working with Johnson & Johnson's Neutrogena brand and with Procter & Gamble, Inc.'s Max Factor.

In the early to mid '90s, Blodgett moved to Bare Escentuals, where she began working as the company's president until 2006. She also served on the board of directors. Blodgett worked as the Chief Executive Officer of Bare Escentuals for a number of years before resigning and earning the title of Executive Chair and member of Bare Escentuals' board of directors. She is also the co-principal executive officer of the company. While serving as president, the company's IPO came out in 2006. It was later sold for nearly two billion dollars to Japanese company Shiseido. Blodgett first debuted on QVC selling the company's make-up on the day of Princess Diana's death in 1997. Bare Escentuals sold about $45,000 that day alone, and Blodgett continued her push to save the then-flailing company by continuing her appearances on QVC and setting up infomercials and customer party, including a cruise to the Bahamas for loyal buyers. 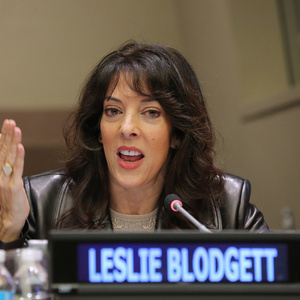