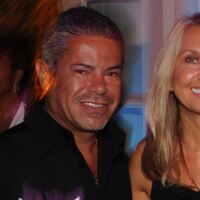 Lee Najjar net worth: Lee Najjar is a successful Puerto Rican real estate developer and reality television star who has a net worth of $50 million. He acquired his net worth through real estate development projects in Atlanta, Georgia. Lee Najjar is connected with the reality show, The Real Housewives of Atlanta, where he is known as "Big Poppa", the former sugar daddy of cast member Kim Zolciak during season 1 and season 2 of the hit reality series, while married to another woman who ironically, is also named Kim. While on The Real Housewives, Najjar was known for flaunting his wealth and funding Kim Zolciak's lavish lifestyle, including her unsuccessful attempt at a music career. On the show, Najjar lived in a $25 million dollar mega mansion located in the upscale neighborhood of Buckhead. Lee Najjar was arrested a few times in 2012, once for DUI on November 7th 2012 in Fulton County Georgia, and again after failing to appear in court after he neglected to maintain a storm water system at one of his homes.