Lee Kun-Hee net worth: Lee Kun-Hee was a South Korean businessman who had a net worth of $20 billion at the time of his death in 2020. That net worth made him the richest person in South Korea. He was the CEO of Samsung Group, a massive South Korean conglomerate which was founded by his grandfather. Samsung, as you may know, is most widely recognized for its very successful electronics division. Lee died in October 2020 at the age of 78.

Born in Uiryeong, South Korea, Lee Kun-Hee graduated from Waseda University in Japan, and attended business school at George Washington University briefly. It was his decision to focus on cutting-edge technology in the 90s, that grew Samsung Electronics into the world's largest flat screen and semiconductor producer. The company also has an increasingly successful mobile phone arm. In addition to his work at Samsung, he also sat on the International Olympic Committee, and was the driving force behind bringing the 2018 Olympics to South Korea. He was involved in the Samsung "Slush Fund Scandal" in 2008, and resigned. He returned to the position of CEO in 2010. He inherited the company from his grandfather, who founded Samsung Group, and has placed his children and their spouses in positions of power all over the company.

Net Worth details: Lee Kun Hee owned approximately 4.3% of Samsung Electronics. His wife owned another 0.8 percent. Lee was also the owner of 21% of Samsung Life Insurance and 2.9% of the Samsung C&T holding company. His personal residence in Seoul was purchased in 2005 and is worth $10 million. 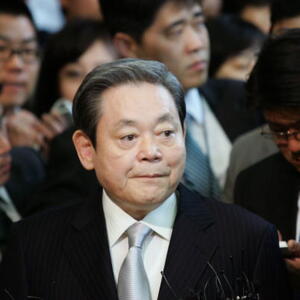