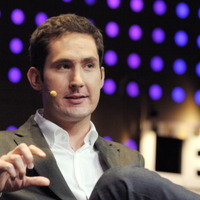 Early Life and Education: Kevin Systrom was born on December 30, 1983, in Holliston, Massachusetts, the son of Diane, a marketing exec at Zipcar, and Douglas Systrom, Vice President in Human Resources at TJX Companies.

While attending Middlesex School in Concord, Massachusetts, he developed an early interest in computer programming. As a kid, he created programs that would prank his friends by appearing to hack their AOL Instant Messenger Accounts. He played "Doom 2" and created his own levels in the game as a child. While attending high school, Systrom worked at vinyl record store Boston Beat.

He attended Stanford University where he studied engineering and management science and graduated in 2006. At Stanford, he was a member of the Sigma Nu fraternity. He built web programs in his free time. One of them was a photo site he set up so that his fraternity brothers could share pictures amongst themselves. This sparked his interest in photography. During his junior year abroad in Italy, a professor introduced Systrom to a Holga—a cheap camera with a cult following because of its retro style photos. Systrom fell in love with not only photography but with the aesthetic of the Holga photos. Systrom's first taste of the startup world was when he was chosen as one of twelve students to participate in the Mayfield Fellows Program at Stanford. This fellowship gave way to his internship at Odeo (the company that eventually gave rise to the behemoth that is now Twitter.)

Career: After his graduation from Stanford, Systrom landed at Google as an associate product marketing manager working on Gmail, Google Calendar, Docs, and other products. He was at Google for two years as their product marketer before he left out of frustration of not being moved into the Associate Product Manager program.

Systrom became interested in location-based apps like Foursquare. After leaving Google to join Nextstop, a location recommendation startup founded by ex Google employees, Systrom had the idea of combining location check-ins with popular social games. Systrom developed a prototype of the idea and pitched it to Baseline Ventures and Andreessen Horowitz at a party.

He co-founded the mobile check-in game called Burbn in 2010. Systrom had come up with the idea on a vacation in Mexico when his girlfriend was unsatisfied with all of her photos because they didn't look good enough when taken with the iPhone 4 camera. The solution was the use of filters over the photos. He quickly noticed that Burbn users loved the retro camera filter aspect of the app. He decided to quit his day job to explore whether or not Burbn could be a successful company. Within two weeks of quitting his job, Systrom received $50,000 of seed funding from Baseline Ventures and Andreessen Horowitz.

In San Francisco, Burbn was being developed into a product that allowed users to do many things: check in locations, make plans via future check-ins, earn points for hanging out with friends, post pictures, and many more features. After several test runs, they concluded that Burbn had too many features that users didn't want. Therefore, the company then completely pivoted its entire purpose and re-branded as Instagram.  As you probably know, Instagram is the massively popular photo sharing app that allows smartphone users to share photos through various online social networks. Users can also give the photos a distinctive look thanks to digital filtering. This filter mostly serves to give the photos a kind of "retro" look, in homage to analog cameras from decades past such as the Kodak Instamatic and the Polaroid instant cameras.

On April 9th 2012, Facebook CEO Mark Zuckerberg announced that his company has agreed to purchase Instagram for $1 billion in cash and stock. The company had just 13 employees. At the time, the 27 year old founder/CEO Kevin Systrom owned 40% of the company and since he took mostly Facebook stock, he was left with a paper net worth of $400 million. Fast forward two years, and the value of Systrom's Facebook stock had more than doubled, leaving him with a net worth of $800 million. Fast forward a few more years and the acquisition had given Systrom a net worth that topped $2 billion. That's an impressive haul, no doubt, but considering Instagram's popularity and size today, it makes you wonder what Kevin would be worth today had he never sold. It has been said that Instagram today could be worth as much as $100 billion on its own.

Under Systrom's leadership, Instagram developed key features throughout the years like the Explore tab, several filters, and videos. They also rolled out features allowing users to upload and filter short videos. Instagram, in 2012, allowed for the development of web profiles and connecting accounts to Facebook, Twitter, Tumblr, and Flickr. By October 2015, 40 billion pictures had been shared on Instagram. One year later, Instagram had over 500 million active users. In 2017, Instagram employed around 450 people and the app was used by 600 million people per month and 300 million per day. In May 2017, Systrom integrated the use of the game-changing Instagram Stories. As of 2020, Instagram has 500 million users daily. On September 24, 2019, Systrom resigned from Instagram suddenly and was gone within just a few weeks.

Personal Life: Systrom married Nicole Schuetz, founder and CEO of clean-energy investment first Sutro Energy Group, on October 31, 2016 in Napa, California. They met when they were both students at Stanford and were engaged in 2014. The pair welcomed a daughter, Freya Systrom, in June 2018.