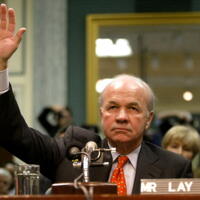 Ken Lay net worth: Ken Lay was an American businessman who had a net worth of negative $250,000 at the time of his death (but a peak net worth of $400 million). Ken Lay was born in Tyrone, Missouri in April 1942 and passed away in July 2006. He was best known for being involved in the Enron scandal. Lay was the founder, CEO, and Chairman of the Enron Corporation. The company used illegal and misleading practices to embezzle, hide, and mislead funds from auditor Arthur Andersen. The deception was discovered in 2000 and became the largest bankruptcy in the world. Ken Lay was inducted by a grand jury. He was found guilty of 10 counts of securities fraud but passed away three months before his sentencing. As a result, his conviction was vacated. He graduated from the University of Missouri and got his Ph.D. from the University of Houston. Lay worked as an economist and served as the Special Assistant to the Navy Comptroller as well as the Financial Analyst at the Office of Assistant Secretary of the Navy for the United States Navy. Ken Lay passed away on July 5, 2006 at 64 years old of a heart attack caused by coronary artery disease.

Estate After Death: At the peak of his life, Ken Lay had a personal net worth of $400 million. He owned more than a dozen homes and in 1999 alone earned $42.4 million in total compensation. Between 1998 and 2001 he earned $300 million worth of stock and stock options. After Enron's collapse, Lay claimed that Enron stock constituted 90% of his net worth and his estate was technically worth negative $250,000 (in 2006). After his death, Enron's creditors sued his widow Linda to recover a portion of $10 million was paid by Enron prior to its collapse to buy the two an annuity. The creditors and Linda reached a settlement in 2011.