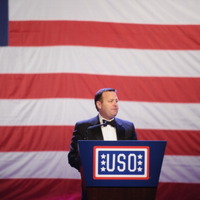 Joseph DePinto net worth and salary: Joseph DePinto is an American businessman who has a net worth of $40 million. Joseph DePinto earned his net worth from his current position as President and Chief Executive Officer of 7-Eleven, Inc., a convenience retailer, since December 2005. He also has held executive positions at PepsiCo, Inc; he was also the President of GameStop Corp, Senior Vice President and Chief Operating Officer of Thornton Oil Corp, director of Jo-Ann Stores, Inc, and a director of Brinker International, Inc., an owner, operator and franchisor of restaurant brands. DePinto is a native of Chicago and earned a bachelor's degree in engineering management from the United States Military Academy at West Point. He also earned an MBA from the Kellogg School of Management at Northwestern University. He is married to his wife Ingrid, and they have four sons, and currently reside in Southlake, Texas. 7-Eleven, Inc. is a leading company in convenience retailing. 7-Eleven is the world's largest convenience store chain with more than 42,400 stores in 16 countries, of which more than 8,800 are in North America. &-Eleven is owned by its Japanese parent company Seven & i Holdings. DePinto is a board director of 7-Eleven, Inc., OfficeMax (NYSE: OMX), Brinker International, Inc. (NYSE: EAT), The Dallas Chamber of Commerce, SMU's Cox School of Business and The National Italian American Foundation. In Addition he is also a member of the Advisory Councils for Outlook Leadership, The Pro Players Foundation, and the Japan-America Society of Dallas/Fort Worth. He is also a Network of Executive Women Champion and is an active member of the Business Executives for National Security. On February 21, 2010 DePinto appeared as himself on the CBS reality series Undercover Boss, during this episode Joe learned that one of his corporate policies has not been implemented on the frontlines, then later he finds himself inspired by one of his delivery driver's approach to life.