He has been a vice-president at IBM and the Chief Executive Officer of Symantec Corporation. Thompson was an independent director on the board of Microsoft and was named Chairman of the board in February 2014. He helped select Satya Nadella as the CEO of Microsoft. He has also been a board member for UPS, Seagate Technology, Florida A&M University, Teach For America, the Illinois Governor's Human Resource Advisory Council, Illumio, and Liquid Robotics. He was appointed to the National Infrastructure Advisory Committee in 2002. Thompson also owns a 20% share of the NBA's Golden State Warriors. He was named the 8th most highly compensated CEO in 2006 by Forbes at $71.84 million. He has been a strong supporter of President Barack Obama and was considered for the post of Secretary of Commerce in 2009. He was appointed to the Financial Crisis Inquiry Commission in 2009 by Speaker of the House Nancy Pelosi. 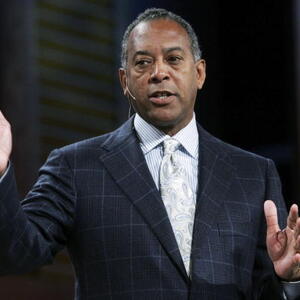