John Paul DeJoria Net Worth: John Paul DeJoria is an American billionaire businessman and philanthropist who has a net worth of $3 billion. He is best known for co-founding the incredibly successful Paul Mitchell line of hair products and The Patrón Spirits Company. It has been widely reported that John Paul Mitchell Systems generates over $900 million in sales each year.

Early Life: John Paul Jones DeJoria was born on April 13th of 1944 in Echo Park, Los Angeles, California. John Paul became involved in entrepreneurialism from a very early age. After his parents divorced when he was two years old, DeJoria began selling Christmas cards and newspapers with his older brother in order to earn money for the family. Raised in Atwater Village and later Revere, John Paul and his brother were ultimately sent to a foster home in East Los Angeles after it became clear that his mother could not support them.

After spending two years in the United States Navy, DeJoria worked a number of jobs. During this period, he worked as a janitor, a door-to-door salesman, and an insurance salesman.

Career: John Paul first became involved with the hair care world after gaining employment at Redken Laboratories. Although he was ultimately fired from this position, DeJoria became intent on starting his own line of hair care products. He spent the next few years living out of his car, selling his own hair care products to various hair salons. He couldn't afford bottles with color printing, so he kept it simple with a white bottle and black lettering.

Eventually, John Paul connected with a hairdresser called Paul Mitchell and started a company called John Paul Mitchell Systems. The company was only formed because DeJoria was able to secure a $700 loan. As time passed, more salons started to buy his products, and the company grew rapidly. Today, John Paul's company has become one of the most influential in the hair care industry.

In 1989, DeJoria co-founded another company, the Patrón Spirits Company. This tequila company also became quite successful, and in 2018 it was announced that John Paul was selling his 70% stake in the company to Bacardi for $5.1 billion. He also owns a nightclub franchise. In addition, John Paul has stakes in oil companies, agriculture, solar energy, and many other businesses.

Outside of his business activities, DeJoria has appeared in a range of television shows and films. He has made cameo appearances in films like "You Don't Mess with the Zohan" and "The Big Tease." He is also known for his appearances in shows like "Weeds." In 2013, he appeared as a guest investor on "Shark Tank."

Relationships: John Paul DeJoria is married to Eloise Broady DeJoria, a model and actress who was previously a Playboy centerfold. The pair were married in 1993, and they have had a number of children together. John Paul is also the father of Alexis DeJoria, an American drag racer.

Impact of Covid-19: In 2020, widespread reports suggested that DeJoria's hair product empire was struggling during the pandemic. With so many barbershops and hair salons shutting down (some permanently), the company's supply line faltered. Sales dropped, and John Paul freely admitted that his enterprise lost 60% of its revenue "almost instantly."

However, DeJoria was quick to devise a business strategy that would allow his business to maintain its place among some of the world's most successful companies. First, John Paul created a plan to maintain all of their employees during this period. He and Mitchell injected $6 million of their own money into the business to maintain salaries and jobs. He then offered discounts and extended payment periods to distributors before offering additional resources to salon owners.

In some cases, his business assisted these small business owners to apply for PPP loans. Finally, DeJoria gave salons more than $4 million worth of free goods to help them restart their business once the pandemic ended. He was praised by the wider business community for his proactive measures, although the impact of further closures and lockdowns remains to be seen.

Real Estate: In 2016, John Paul sold his Texas ranch for $6.93 million. The unique real estate deal also included a collection of 120 exotic animals, including wildebeest, oryx, gazelle, and antelope. Visitors to the 96-acre ranch claimed that the area felt like an "African Safari." Located about 25 miles from Austin, the property also includes its own high-tech, 2,700-foot bomb shelter complete with months of supplies. The actual home residence spans 7,500 feet and includes four bedrooms. Additional features include a swimming pool and two barns.

In 2017, it was reported that DeJoria had paid $11.65 million for a property in Newport, Rhode Island. Known as "Ocean Lawn," the estate was originally listed for $18.5 million before continuous price cuts brought it down to DeJoria's accepted offer. The 16,200-square-foot mansion sits on 6.7 acres of oceanfront property along the Cliff Walk area of Newport. The outdoor area features a swimming pool and a large children's playhouse (which comes complete with its own kitchen, living room, and fireplace).

In 2019, John Paul DeJoria paid $40 million for the famous "McDonald's Campus" in Oak Brook. The business site includes the McDonald's campus office building the Hamburger University training facility, and a Hyatt hotel. Although it wasn't exactly clear what John Paul intended to do with the 80-acre property, reports stated that he intended to continue using it for commercial space. 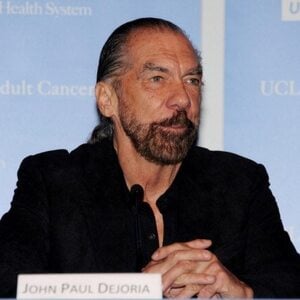