How much is John McAfee Worth?

John McAfee Net Worth: John McAfee is the former CEO of the anti-virus software company McAfee, who has a net worth of $4 million. John McAfee's net worth was once north of $100 million, but he lost much of it thanks to bad investments and the 2008 global recession.

Early Life: John David McAfee was born in Cinderford, England, on September 18, 1945, on a United States Army Base. His mother is British, and his father is an American soldier stationed there at the base. McAfee was raised in Salem, Virginia, in the United States. He has states that he feels just as British as he does America. His father was an abusive alcoholic, and committed suicide by gun when McAfee was fifteen years old. He attended college at Roanoke College in Salem, Virginia, and graduated in 1967 with a bachelor's degree in mathematics. The school later awarded him an honorary Doctor of Science (Sc.D.) degree in 2008.

Career: After graduating from college, from 1968 to 1970 McAfee worked at NASA's Institute for Space Studies, located in New York City. He was a programmer for the program. After leaving NASA, he worked as a software designer at Univac, and then at Xerox as an operating system architect. In 1978, McAfee made the transition to consulting when he joined the Computer Sciences Corporation as a software consultant. Then, for two years from 1980 to 1982, he worked for the consulting firm Booz Allen Hamilton.

It was while he was worked for Lockheed in the 1980s that McAfee began working on developing virus combating software. In particular, he began working on anti-virus software after receiving a copy of the Brain computer virus. In 1987, McAfee left his job to start his own computer anti-virus company, McAfee Associates. A few years later, in 1992, the company became incorporated in the state of Delaware. He remained with the company for two more years before resigning in 1994. Then, two years after McAfee associates went public, he got bored with the software business and sold his entire stake in the company for $100 million.

In 1997, McAfee Associates merged with the company Network General to form Network Associates. Seven years later, Network Associates was renamed McAfee, Inc. McAfee Inc. was bought by Intel in August 2010. It maintained its own branding separate from that of Intel until January 2014, when McAfee-related products began being marketed under the name Intel Security. In 2017, the unit formerly known as McAfee, Inc., was spun out of Intel in a joint venture between Intel and TPG Capital, called McAfee, LLC.

A series of bad investments, including a large bet on Lehman Brothers' bonds, cost McAfee millions and forced him to sell real estate and other assets for pennies on the dollar. For example, McAfee sold a $25 million Colorado estate for just $5.7 million. He also sold a mansion in Hawaii, a ranch in New Mexico and a Cessna private jet.

Legal Issues: McAfee formerly resided in Orange Walk Town, Belize. In April 2012, his property was raided by Belizean Police Department's Gang Suppression Unit. McAfee was arrested by the police for unlicensed drug manufacturing and possession of an unlicensed weapon, but was later released without charge.

Later that same year, in November 2012, the Belizean police began investigating McAfee as a person of interest relating to the murder of an American expatriate. Gregory Viant Faull had been found dead in his home in Belize on November 11, 2012. He died from a gunshot wound. Faull had been McAfee's neighbor, which is why police were interested in investigation his connections to Faull. McAfee ended up fleeing Belize after police sought him for questioning related to Faull's murder. He attempted to seek asylum in Guatemala City, Guatemala, but was arrested on December 5, 2012, for illegally entering Guatemala. While he was arrested, his asylum request was denied, and had to wait for deportation in a Guatemalan detention center holding facility.

Eventually, after he suffered from what ABC News reported to be two minor heart attacks in the detention center, McAfee was released on December 6, 2012, and deported from Guatemala back to the United States. McAfee later said he faked the heart attacks in order to buy time for his attorney to file an appeal for him.

McAfee has since had many more run-ins with the law. In August 2015, he was arrested in Tennessee for driving under the influence and possession of a firearm while intoxicated. Then, in November 2018 the Circuit Court in Orlando, Florida, declined to dismiss a wrongful death lawsuit that had been brought against McAfee for Faull's death in Guatemala. Subsequently, another suit was brought against him in early 2019, with a Grand Jury convened to indict him on tax-related charges. Thus, he announced in January 2019 that he was running from U.S. authorities and living on a boat.

He has been arrested several more times. In July 2019, he was arrested in Puerto Plata, Dominican Republic, while his yacht was docked there. He was released after being held for four days. In October 2020, he was arrested in Spain after the U.S. Department of Justice requested his detainment for tax evasion.

Personal Life: After McAfee arrived back in the U.S. following his deportation from Guatemala in December 2012, he was solicited by a sex worker in South Beach, Miami. This woman, Janice Dyson, ended up marrying McAfee in 2013 after they began a relationship together. 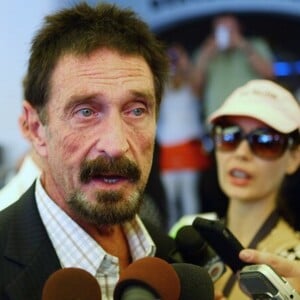