John Legere net worth and salary: John Legere is an American businessman who has a net worth of $350 million. John Legere was born in Massachusetts in June 1958. He is most famous for being the former chief executive officer of T-Mobile US. Legere previously worked for companies including AT&T, Global Crossing, and Dell. He is also on the board of directors for CTIA. John Legere earned his B.B.A. from the University of Massachusetts, Amherst. He also earned his M.S. from the MIT Sloan School of Management and his M.B.A. from Fairleigh Dickinson University. He became the CEO of T-Mobile in 2012 and has been responsible for the brand's "un-carrier" approach which does not use contracts for wireless networks. Legere worked for AT&T for nearly 20 years. He was the senior vice president of Dell and has held many other positions. In college he was a nationally competitive runner and he completed the Boston marathon in 2004.

John Legere's salary: In a typical year, John's Legare's base salary was $1.5 million. He earned more than that thanks to bonuses and stock awards. For example, in 2017 his total compensation topped $23 million. In 2018 he earned a total of $66.5 million, enough to make him one of the highest-paid CEOs in the world.

Equity Holdings: According to an April 2020 SEC filing, John is the beneficial owner of 2.7 million shares of T-Mobile. At that time, those shares had a pre-tax market value of $250 million.

In November 2019 it was announced that Legere would step down as T-Mobile CEO. He was paid $27 million in salary and $100 million in severance when he stepped down. 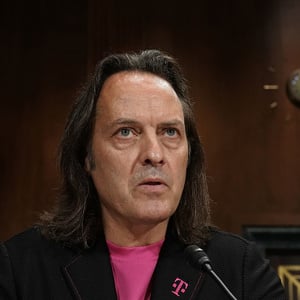