John Chambers Net Worth: John Chambers is an American entrepreneur and CEO who has a net worth of $1 billion dollars. Born in Cleveland, Ohio, in 1949, John Chambers grew up in West Virginia and was diagnosed with dyslexia before his tenth birthday. He attended West Virginia University, earning business and law degrees, and later received an MBA from Indiana University's Kelley School of Business.

Once he had his MBA, Chambers joined IBM as a salesman in the mid 70s. After several years, he joined Wang Laboratories, working his way up to VP of U.S. Operations, before leaving for Cisco in 1991. Four years later, Chambers became Cisco's CEO, growing the company from an estimated $70 million in annual revenue to about $46 billion. He is an active political supporter, frequently donating to both parties. Chambers has given more than one million dollars to the Republican Party and just under $200,000 to the Democrats as of 2014. He co-chaired Senator John McCain's presidential campaign in 2008. Chambers is the winner of several awards, including the Clinton Global Citizen Award, the 2012 Franklin Institute's Bower Award for Business Leadership, and the Woodrow Wilson Award for Corporate Citizenship. He has been named to a "Time Magazine" list of the 100 Most Influential People and earned recognition as one of CNN's Top 25 Most Powerful People. Chambers has two children with his wife, Elaine. 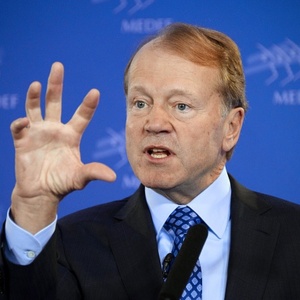