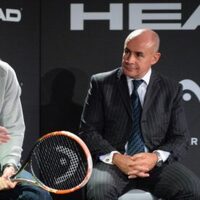 Johan Eliasch Net Worth: Johan Eliasch is a Swedish businessman who has a net worth of $600 million dollars. Johan Eliasch was born in Sweden and, since 1995, has served as the both the Chairman of the Management Board of Head N.V. and Group Chief Executive Officer. Head N.V. is a major global sporting goods company. In addition to running Head N.V., he is also the Chairman of Equity Partners, London Films, Co-Chairman of Cool Earth, President of Global Strategy Forum, non-executive Chairman of Investcorp Europe, and non-executive director of IMG and CV Star Underwriting Agents. He also serves on the Advisory Boards of Brasilinvest, Societe du Louvre, Centre for Social Justice, and the British Olympic Association. He is also a member of the Major of London's and Rome's International Business Advisory Council, a patron of Stockholm University, and a trustee of the Kew Foundation. From 2007-2010, he was the Special Representative of the Prime Minister of the United Kingdom. He is heavily involved in rainforest preservation initiatives in the Amazon.