What is Jimmy Wales' New Worth and Salary?

With a slight twist of fate/strategy, Jimmy by any count could have been a multi-billionaire. If Wikipedia was not a non-profit and instead accepted just basic banner ads, it could be worth – by some estimates – more than $10 billion. Instead, Jimmy wasn't even a millionaire when he gave an interview with the New York Times in 2013. In that interview, on the subject of lost billions, Jimmy explained:

"It rarely crosses my mind. Reporters ask me all the time and expect me to say: 'I'm heartbroken. Where's my billion dollars?' There are care dealers in Ohio who have more money than I'll ever have, and their jobs are much, much less interesting than mine."

In a 2019 Tweet, Jimmy confirmed that in the entire history of the Wikimedia Foundation, he has made $0 in salary.

Wales was born in Huntsville, Alabama on August 7, 1966 to parents Jimmy Sr. and Doris Ann. His father was a grocery store manager and his mother ran a private school called the House of Learning. Wales, along with his three siblings, received their early education at this school.

Throughout his childhood, Wales loved reading and developed an interest in encyclopedias. He quickly realized that while encyclopedias were full of information, they also left out a great deal of relevant details. Education was highly valued in the Wales household and after eight grade, Wales attended Randolph school, a preparatory school that was expensive for the family. He was able to graduate at the age of 16 and then attended Auburn University, where he achieved a bachelor's degree in finance in 1986. He then began a PhD program at the University of Alabama but transferred to Indiana University. While he did teach at both university during his postgraduate studies, he never completed his dissertation.

Wales began his career in 1994 at Chicago Options Associates, an options trading firm in Chicago. Wales had developed an interest in computer code while in school, as well as computer games and computer networks in general. This interest inspired him to leave his finance job and found Bomis, a web portal and "guy-oriented search engine" with two partners in 1996.

Bomis was ultimately not successful but it did provide Wales with the time to pursue another idea – an online encyclopedia. In 2000, along with Larry Sanger, Wales launched Nupedia, a peer-reviewed, open-content encyclopedia online. Wales intended for many experts to write articles on a volunteer basis that would then be reviewed by hundreds of other experts to ensure articles of a quality comparable to that of professional print encyclopedias.

However, the lengthy submission and review process made Nupedia very slow to develop and grow. Sanger, after having met programmer Ben Kovitz, suggested that Nupedia should suggest the wiki model, allowing editors to contribute simultaneously and incrementally. While the experts already working on the project did not want anything to do with this idea, as they considered it to be amateur, the resulting wiki pages soon flourished. Dubbed Wikipedia by Sanger, the website had its own domain and the number of articles on Wikipedia quickly surpassed that of Nupedia.

In its early years, Wikipedia was developed and guided by Sanger, though the original idea came entirely from Wales. Additionally, Wales' first company, Bomis, continued funding the project for some time. Sanger worked as editor-in-chief of the website until he resigned in 2002. Since then, there has been disagreement between Wales and Sanger regarding who holds the title of founder or co-founder of Wikipedia, as Wales has since declared himself to be the sole founder. 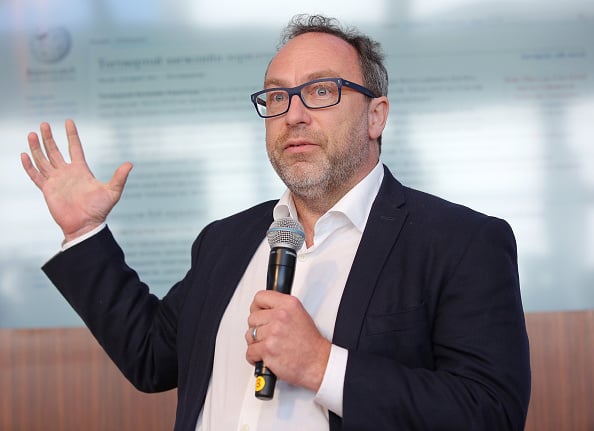 In 2003, Wales set up the Wikipedia Foundation, a non-profit organization that handles off intellectual property rights and domain names related to Wikipedia. In 2004, Wales founded the for-profit company, Wikia. Wikia is a wiki farm, meaning it hosts collections of individual wikis on different topics like "Star Wars" or "Harry Potter." Wikia also offered a search engine that was meant to rival Google.

Wales has gotten involved with politics, especially in the 2010s, primarily regarding topics relating to Internet freedom and privacy. He testified before the U.S. Senate Committee on Homeland Security and Government Affairs on the benefits of Internet technology. He also was very critical of the 2014 European court of Justice ruling that gave individuals the right to request Google to remove information about them. He has been critical of both UK and US politics.

Wales has received a number of awards and accolades over his life. He is a former co-chair of the World Economic Forum on the Middle East and has also served on many boards for Internet and technology related issues at Harvard Law School and MIT. In 2014, he was awarded a Doctorate Honoris Causa by the Faculty of Communication Sciences by USI Lugano University. He received another honorary degree from Glasgow Caledonian University in Scotland, as well as from Maastricht University. In 2017, he was awarded the President's Medal of the British Academy for his developing of Wikipedia.

Wales has been married three times. When he was 20, he married his co-worker at a grocery store, Pamela Green. They divorced in 1993. He then met his second wife, Christine Rohan, through a mutual friend while working in Chicago. They were married in Florida in March of 1997. They had a daughter together but then separated in 2008.

In 2008, Wales briefly was romantically involved with conservative columnist Rachel Marsden, though their relationship ended in controversy. Their relationship was said to be a conflict of interest as Wales had originally contacted Marsden regarding her Wikipedia biography.

In 2012, Wales married Kate Garvey in London in October of 2012. The two met in Davos, Switzerland. The couple have had two daughters together. They have lived in London since 2012 and Wales became a British citizen in 2019.

Wales enjoys cooking and philosophy. He describes himself as an Objectivist and is also an atheist. He was heavily influenced by economist Friedrich Hayek's essay, "The Use of Knowledge in Society," when creating Wikipedia and deciding how it should operate. He also is a fan of Ayn Rand and describes his political views as center-right. 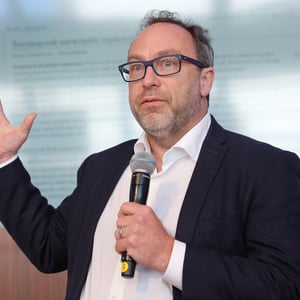