What is Jimmy Iovine's net worth?

Jimmy Iovine is an American music producer and entrepreneur who has a net worth of $1 billion. Jimmy earned his first fortune as the co-founder of Interscope Records which had enormous success especially in the 1990s and 2000s thanks to hip-hop artists such as Dr. Dre, Tupac, Snoop Dogg and Eminem. He then earned a second fortune as the co-founder of Beats Electronics which was acquired by Apple for $3 billion in May 2014.

At the time of the Apple deal, which included $2.6 billion in cash and $400 million in stock, Dr Dre and Jimmy both owned 25% of the company and therefore each took home $750 million before taxes (roughly $580 million after taxes). One of the major reasons Apple was interested in the acquisition in the first place was to bring Jimmy on as an executive to help them navigate the media world in future negotiations over music and video licensing deals.

Jimmy Iovine was born on March 11, 1953 in Brooklyn, New York to a working-class Catholic-Italian family. He briefly attended John Jay College of Criminal Justice but by 19 had dropped out and was working as a janitor in a New York City recording studio called Record Plant Studios. Through this job Jimmy was introduced to the world music production. He soon transitioned from cleaning the studios to helping out with basic production work. One of the engineers who showed Jimmy the ropes was named Ray Cicala who had an impressive roster of clients and work.

On an Easter morning in the early 1970s, Jimmy got a call from Ray asking if he could come to the studio to help with an artist. After being admonished by his mother for skipping out on Easter church services, Jimmy rushed down to Record Plant Studios where he quickly learned that it wasn't just any artist. It was John Lennon.

Sensing that Lennon was struggling with a song called "Stay in the Chair", Jimmy stepped in and sharpened the song through the engineering booth. The former Beatle was impressed and Jimmy would go on to work on two more of Lennon's solo albums.

Working with John Lennon made Jimmy Iovine a star. In the 1970s he became one of the most sought-after producer/engineers in music. He would go on to produce albums for artists including Bruce Springsteen, Tom Petty & the Heartbreakers, U2 Stevie Nicks, Simple Minds, Dire Straits, Patti Smith and more.

In 1990, Iovine co-founded Interscope Records with Ted Field as a joint venture under Warner Music Group's Atlantic Records. Interscope's first release was the annoyingly-catchy song "Rico Suave" by Ecuadorian rapper/singer Gerardo. The single was released in December 1990 and reached #2 on the Billboard Hot 100. A few months later the label released the Primus album "Sailing the Seas of Cheese". In July 1990 Interscope released Marky Mark and the Funky Bunch's debut album "Music for the People" which was a massive hit thanks to the #1 single "Good Vibrations".

In 1992 Interscope acquired the exclusive rights to distribute releases from Suge Knight and Dr. Dre's newly launched label Death Row Records. Through Death Row, Interscope would eventually launch the careers of Snoop Dogg (then known as Snoop Doggy Dogg), 2Pac, Nate Dogg, among many others. Perhaps more importantly, it was through Death Row that Jimmy became intimately acquainted with producer/artist Dr. Dre.

Over the next two decades, Jimmy and Interscope would have enormous success with artists like Eminem, Lady Gaga, Gwen Stefani, Billie Eilish, Imagine Dragons, Kendrick Lamar, Maroon 5, Selena Gomez and more. The company ultimately became Interscope-Geffen-A&M. Jimmy has served as Chairman since 2001. 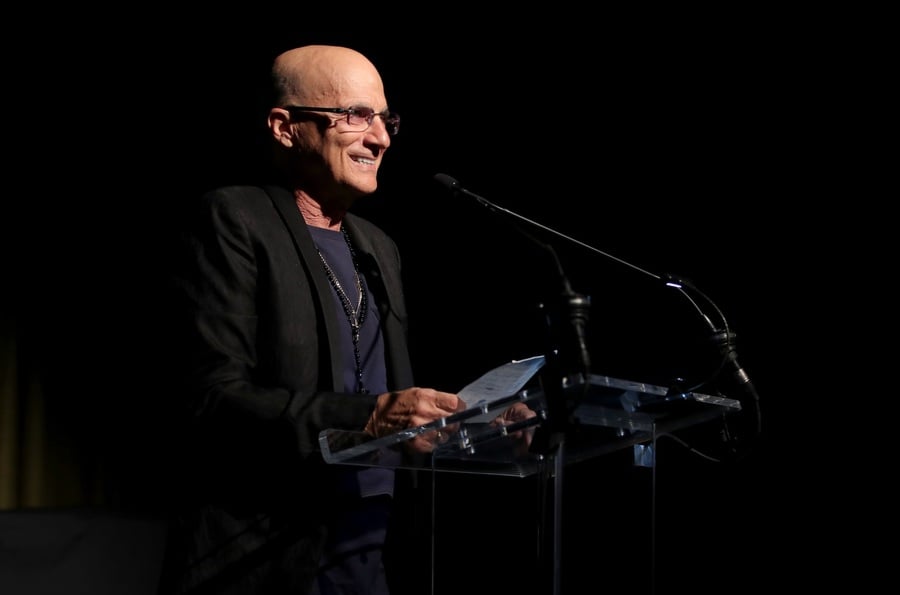 In the late 1990s, Jimmy understood Napster's fundamental threat to the music industry. He did not think Napster would go away and he was upset that the industry's reaction was to sue music users. As a result, he began to meet with tech luminaries to find a way through the problem. One of the luminaries he met with was Apple founder Steve Jobs who had recently returned as company CEO.

Jimmy's early insight was that if people no longer paid for music, he had to find a way to sell consumers SOMETHING. It took several years to determine what that meant, and the idea came thanks to his old friend Dr. Dre. One day, while having lunch together, Jimmy was surprised to learn that Dre, an audio perfectionist, was upset at the quality of music his children heard through the personal audio devices of the time. That was the spark that led Jimmy to pitch Dre on technology company.

In 2006 Jimmy and Dre founded Beats Electronics initially as a partnership with component manufacturer Monster Cable. The first product created by this partnership, Beats by Dr. Dre Studio headphones, was released in July 2008.

At the time of the deal's closing, Jimmy and Dre's cash stake would have been worth around $435 million after taxes. If Jimmy held on to their Apple stock over the next six years, the value of their options would have nearly tripled to $300 million (pre-tax).

Jimmy Iovine's longtime primary residence has been a 1.76-acre plush estate in LA's exclusive Holmby Hills neighborhood. He paid $7 million for the estate in 1998. The estate has a lawn large nearly the size of an NFL football field which is appropriate because Jimmy loves to have friends over for touch football games.

In March 2015, Jimmy acquired a Malibu mansion for $60 million. The seller was television producer Marcy Carsey, co-founder of  The Carsey-Werner Company which produced The Cosby Show, Roseanne, 3rd Rock from the Sun and more.