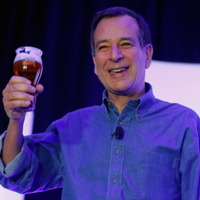 Jim Koch net worth and salary: Jim Koch is an American businessman who has a net worth of $1 billion. Jim Koch has earned his net worth as one of the founder of Boston Beer Company. The Boston Beer Company is probably most famous for producing the Samuel Adams line of craft beers. Jim comes from a long line of master beer makers. His father was a fifth generation brewer and had old recipes stored in the attic of his childhood home. Jim was born in Cincinnati, Ohio and he has three degrees from Harvard University, including a B.A. and J.D./M.B.A. He founded the Boston Beer Company in 1984 and over the last three decades has grown the business by leaps and bounds. When he first launched the company, his goal was to sell $1 million worth of beer within six years. He paid himself a salary of $60,000. Six years later the company had exceeded that goal SLIGHTLY by selling over $21 million worth of beer. A decade after launching, the company was selling over $128 million worth of beer every year. In 2013 the company's revenue topped $530 million, with profits of over $100 million. The company is traded on the New York Stock Exchange under the appropriate ticker symbol "SAM". As of this writing, the company has a market cap of $3.13 billion. Thanks to his 1/3 ownership stake, Jim Cook became a billionaire on paper for the first time in September 2013.