Jeffrey Immelt net worth and salary: Jeffrey Immelt is an American business executive who has a net worth of $150 million. He served as CEO of GE from 2001 to 2017. His very first day on the job was September 10, 2001, one day before the 9/11 terrorist attacks. At his peak with GE, he earned an annual salary of $22 million. During his time at GE, Jeff earned at least $200 million in compensation. It's unclear if that number includes roughly $85 million in pension benefits he also amassed. During that same period, GE lost $150 billion in market cap value.

Jeffrey Robert Immelt was born in Cincinnati, Ohio on February 19, 1956. His father managed General Electric's Aircraft Engines Division. Jeff graduated from Dartmouth College with an A.B. in Applied Mathematics and from Harvard University Business School. During summer breaks from school he worked at a Ford plant in Cincinnati. He also briefly worked for Procter and Gamble in between undergrad and grad school.

General Electric Career: Jeff went to work for GE in 1982, landing a position in the company's plastics/appliances and healthcare division. He was named a GE officer in 1989 and joined GE's Capital board in 1997. He ran GE's Healthcare division from 1997 until his promotion to CEO in 2001. He was considered former CEO Jack Welch's handpicked-choice to takeover after he stepped down.

He became the CEO of General Electric in 2001, literally one day before the September 11th attacks. GE's insurance division lost hundreds of millions of dollars as direct result of the attacks. Two employees were also killed in the attacks.

Unlike his predecessor, Welch, who focused on organic growth, Immelt relied heavily on acquisitions to fuel GE during his time as CEO. In retrospect, many of these acquisitions would look unwise. Some of them were basically very expensive flops. Immelt also sold several highly-profitable GE divisions for what, in retrospect, appear to be cut-rate amounts. Under Jeff's direction, GE sold its plastics business, its appliance division and television network NBC.

His leadership of GE has been widely criticized for cutting American jobs and paying little to no corporate income taxes. He also spent cash on stock buybacks at prices that would eventually prove to be exorbitant.

During his time as CEO, GE's stock price sank 30%, erasing $150 billion in market cap from the company.

Private Jets: One of the most embarrassing accusations lobbied against Immelt involves his usage of GE's corporate jets. According to an October 2018 WallStreetJournal article, for much of his 16-year tenure as CEO, Jeff had an empty private jet follow him wherever he flew in the main GE private jet (the company owned six). The alleged reason for the empty jet was in case his main jet had a mechanical problem. According to the WSJ report, the jets would park far apart at airports to not attract attention and pilots/crew were told not to discuss the double jets. In reaction to the report, GE claimed Immelt only used the "chase plane" on limited occasions and stopped the practice in 2014. However, the WSJ then reported that Immelt had used the chase plane just several months prior to their article, when two GE jets flew from Boston to Anchorage, Alaska. One plane went to South Korea then China, while the chase plane stayed in Anchorage. When Immelt flew back to Anchorage to refuel, the chase plane followed back to Boston.

Outside of GE: Immelt is on the board of the non-profit Robin Hood Foundation, an organization dedicated to addressing issues of poverty in New York City. In 2008, he was selected for inclusion in Time Magazine's list of the Most Influential People in the World. In 2009, he joined the President's Economic Recovery Advisory Board, and in 2011 he became Chairperson of the Council on Jobs and Competitiveness, a White House panel of external economic advisors tasked with boosting the job market in the United States. 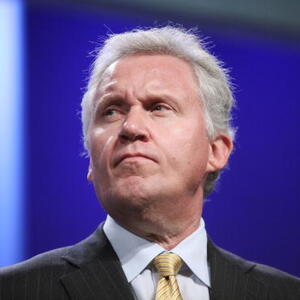