What is Jeff Bezos' net worth?

Jeff Bezos is an American philanthropist, businessman and space explorer who is probably best-known for creating Amazon.com. Jeff Bezos is the founder, chief executive officer, president and chairman of the board of Amazon.com. He first surpassed Bill Gates in terms of wealth in July 2017. He was the richest person in the world without interruption between October 2017 and January 2021.

As of this writing Jeff Bezos has a net worth of $190 billion.

According to the company's most recent SEC filing, Jeff owns 55 million shares of Amazon, roughly 12% of the total shares outstanding. At his peak he owned 80 million shares of Amazon. As part of his April 2019 divorce settlement with MacKenzie Bezos, Jeff transferred 19.7 million shares to his ex-wife. The value of the shares at the time of the transfer was $36 billion. The settlement temporarily reduced Jeff's net worth from $150 billion to $114 billion. Jeff was also an early pre-IPO investor in Google.com and owns at least $1 billion shares in what is now known as Alphabet Inc.

For much of the 2000s, Jeff was not even in the top 10 or top 20 of the wealthiest people on the planet. Amazon stock began to sky rocket in late 2014. In July 2015, Jeff's net worth was $50 billion. In under two years, his net worth (and the stock) had doubled. On July 27, 2017, Bezos took over Bill Gates as the richest person on the planet. In September 2018, Amazon's market cap topped $1 trillion. This was prior to his divorce so he still owned 80 million shares. At that valuation, Jeff's net worth topped an then-all-time high of $170 billion.

Is Jeff Bezos the Richest Person of All Time?

When comparing Jeff's peak net worth of $170 billion to our list of the richest people of all time after adjusting for inflation, Jeff is not even in the top 10. Using the $170 billion number, that would be the 11th largest fortune ever accumulated by a single human (counting inflation). For comparison, when oil tycoon John D. Rockefeller died, he was worth an inflation-adjusted $340 billion.

Could Jeff Bezos Become a Trillionaire?

Anything is possible! But it seems like an extremely lofty goal if he's just relying on his Amazon shares to get trillionaire status. As the owner of 12% of Amazon's shares, Jeff is essentially worth $120 billion (on paper) for every $1 trillion market cap milestone. So, in other words, for Jeff to become a billionaire based exclusively on his Amazon shares, the company's market cap would need to top $8.3 trillion.

Jeff Bezos was born on January 12, 1964 in Albuquerque, New Mexico. His mother was a 17 year old high school student when she gave birth to Jeff. His father owned a bike shop. His mother eventually divorced Jeff's birth father. When he was 4 she married a Cuban immigrant named Miguel Bezos. Soon after the wedding, Miguel adopted Jeff and Jeff's last name was legally changed from Jorgenson to Bezos. The family moved to Houston where Mike got a job as an engineer for Exxon. They were also closer to his mother's parents who had a cattle ranch south of San Antonio. His maternal grandmother Mattie Louise Gise was first cousins to country singer George Strait.

While growing up in Texas, Bezos used his parents' garage as a laboratory for his science projects. He would also spend summers working at his grandparent's ranch. Jeff would later claim to have learned his work ethic during his summers at the ranch. He would also later purchase the ranch and expand it from 25,000 to 300,000 acres.

The family moved to Miami, around the time Jeff was entering high school. While in high school, Jeff worked as a short order cook at McDonald's. He was high school valedictorian and a National Merit Scholar. In his valedictorian speech, he mentioned a dream that people of the earth would eventually colonize space.

Upon graduating from college, Jeff went to work for a financial technology firm called Fitel. He then transitioned to the banking industry when he landed a product management job at Bankers Trust. In 1990 he was hired as a financial analyst for D. E. Shaw & Co., a hedge fund that had recently been launched with the idea that mathematical modeling could predict big market gains.

Jeff worked at D.E. Shaw until 1994, by which point he had risen to the company's fourth senior vice president. He was 30 years old.

A year earlier, Jeff became fascinated with the nascent world wide web. He wanted to sell something online and he landed on selling books. Bezos created Amazon's business plan during a cross country drive from New York to Seattle. He officially founded the company in 1994, setting up the original business in his garage.

In 2008, Bezos received an honorary doctorate in Science and Technology from Carnegie Mellon University, and in 1999 Bezos was named Time magazine's Person of the Year. In 2000, Bezos founded Blue Origin, a human spaceflight startup company, partially as a result of his fascination with space travel. Blue Origin includes an early interest in developing space hotels, amusement parks, colonies and small cities for 2 million or 3 million people orbiting the Earth. The company was kept secret for a few years until it became publicly known in 2006 after purchasing a sizable aggregation of land in west Texas for a launch and test facility. In 2013, Bezos was discussing commercial spaceflight opportunities and strategies with Richard Branson, multibillionaire founder of Virgin Group – during that year he also purchased The Washington Post. 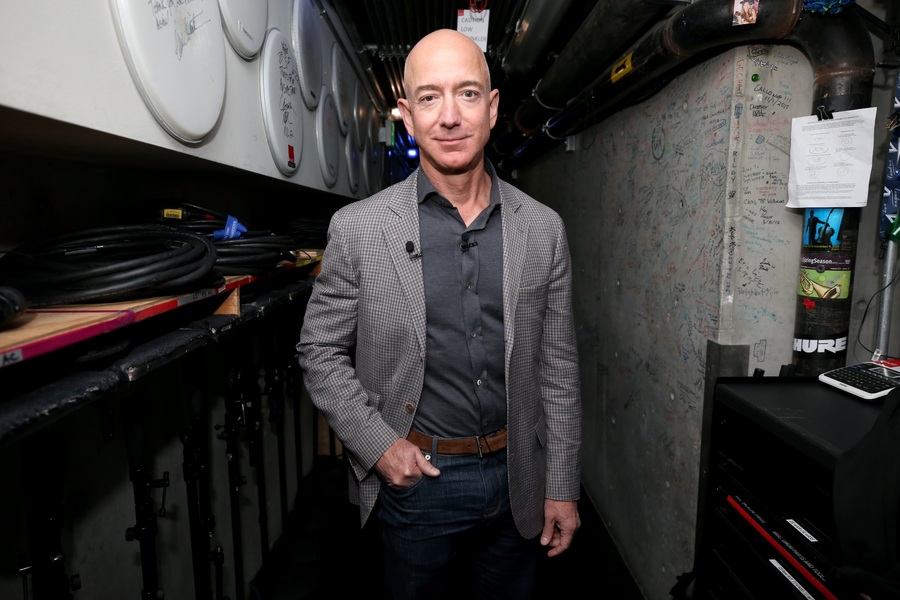 On February 12, 2020, it was revealed that Jeff had paid $255 million for two properties in Beverly Hills. The first property, known as the Jack L. Warner estate, cost $165 million. The estate covers 10 lush acres in the heart of Beverly Hills and features a 13,600 square-foot main house. The seller was entertainment mogul David Geffen who bought the property in 1990 for $47.5 million. The second property Bezos bought in February 2020 was a 120-acre vacant hilltop called Enchanted Hill. The seller was the estate of late Microsoft founder Paul Allen, who purchased the land in 1997 for $20 million. Though mostly overrun with weeds, the property does have a 1.5 mile driveway and manicured bluff at its peak.

Net Worth Details And History

In the 20 years since Amazon went public, Bezos has sold at least $70 billion worth of his shares. He sells roughly $1 billion worth of shares every year as part of a planned stock sale arrangement.

The day Amazon went public, Amazon's market cap was $300 million. Jeff owned 40% of the company at the time, giving him a net worth of $120 million (on paper, pre-tax). With a year he was worth $1 billion. At the peak of the dotcom bubble Jeff's net worth topped $10 billion. After the bubble burst, Amazon's stock price sank to an all-time low of $5 per share in October of 2001. At that point, Jeff's net worth sank to $1-2 billion.

If you had been smart enough to take $10,000 and buy shares of Amazon in October of 2001, today you would have more than $15 million before counting any dividends.

January 2019 – Jeff announces he is divorcing his wife of 25 years, MacKenzie. Clearly the outcome of this divorce will have an enormous impact on Jeff's $150 billion net worth.

April 4, 2019 – Jeff and MacKenzie announced that they had reached an amicable resolution of their divorce where she will be given $36 billion worth of Amazon stock. Jeff will retain 75% of his former stake and will have voting control over MacKenzie's shares. She will not have any ownership in The Washington Post or Jeff's space company Blue Origin. It's unclear how the couple decided to split their various homes and jets. Jeff's net worth immediately following the announcement became $114 billion.

Jeff Bezos has a net worth of $194 billion. As of this writing, that makes him the richest person in the world. He is the founder and CEO of Amazon.com. He lost $36 billion of his fortune as a result of his divorce from MacKenzie Bezos, who instantly became one of the 25 richest people in the world with the settlement. 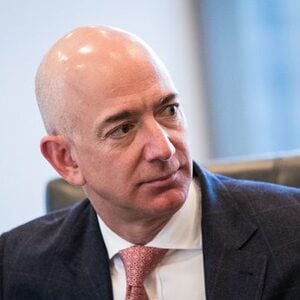