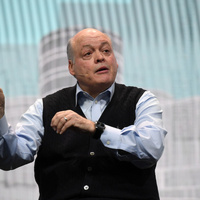 James Hackett net worth and salary: James Hackett is an American businessman who has a net worth of $50 million. James Hackett was born in Columbus, Ohio in April 1955. He is the president and chief executive officer of the Ford Motor Company. Hackett graduated from the University of Michigan and played on the football team as a center. He worked at Procter & Gamble in the sales and management departments from 1977 to 1981. James Hackett worked for the office furniture company Steelcase beginning in 1981. He was named CEO in 1994 and held the role for 20 years until he retired in 2014. He served as interim director of Athletics for the University of Michigan and helped hire Jim Harbaugh as the football coach. Hackett joined the Ford Motor Company's board of directors in 2013. He succeeded Mark Fields to become president and CEO in 2017. Hackett is on the board of directors for Northwestern Mutual Life among other boards. In 2018 James Hackett earned around $16 million in total compensation.