Jack Roush Net Worth: Jack Roush is an American businessman and CEO who has a net worth of $300 million dollars. Born in Covington, Kentucky, in 1942, Jack Roush graduated from Berea College with a bachelor's degree in physics and from Eastern Michigan University with a graduate degree in scientific mathematics. He went to work for the Ford Motor Company after graduation, but left four years later to start his own business.

After a brief stop working for Chrysler, he started an engineering firm and teamed up with Wayne Gapp in racing. He sold parts his company engineered for their own race cars and partnered with a German company to develop race cars for Ford; that led to the rise of the IMSA Camel GT and Trans-Am series of cars. He founded his own NASCAR Sprint Cup Series team, Roush Fenway Racing, in 1988. As of 2014, Roush has three cars in the series with drivers Carl Edwards, Greg Biffle, and Ricky Stenhouse, Jr. Overall, his team has won seven NASCAR championships: 2 Sprint Cup wins, 4 Nationwide Series wins, and one Camping World Truck Series win. His cars have won two Daytona 500s with Matt Kenseth in the driver's seat. In addition to racing, his company, Roush Performance, designs and sells parts for race cars and other vehicles, and had a big hand in the development of the upfitted Ford Mustangs. Roush has been involved in several plane accidents. He was pulled unconscious from the depths of an Alabama lake when his plane went down in 2002. Eight years later, his jet crash-landed on approach to a Wisconsin airport, with Roush losing his eye in the accident. 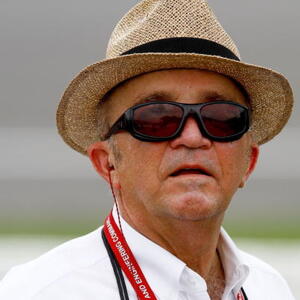