Ivan Seidenberg is an American businessman who has a net worth of $55 million. Ivan Seidenberg has earned his net worth as former Chairman and CEO of Verizon Communications. Seidenberg is the current Chairman of the Business Roundtable, on August 1, 2011 Verizon's current President and COO succeeded Seidenberg as CEO. He was born on December 10, 1946, and started his business career in an entry level position at NYNEX and quickly became the CEO in 1994.

He was wounded in the Vietnam War and later earned a bachelor's degree in mathematics from the City University of New York, and an MBA from Pace University. Seidenberg showed his generous by donating $15 million dollars to Pace University, in 2006. The University renamed the Pace's School of computer Science and Information Systems to the Ivan G. Seidenberg in honor of his donation. Seidenberg was appointed to the National Security Telecommunications Advisory Committee, in 2007 by President George W. Bush. The purpose of the committee is to keeps the President informed on communications issues related to national security, emergency preparedness and the protection of critical infrastructure. Seidenberg is a member of the President's Council of the New York Academy of Sciences. He also a member on the board of directors/trustees of the following: The Paley Center for Media, The New York Hall of Science, Pace University, The New York-Presbyterian Hospital and the Verizon Foundation. Ivan Seidenberg stated as reported in the WSJ: "Verizon CEO No Bailout for Me, Thanks," Seidenberg clearly stated that Verizon doing just fine and would not take any TARP money. There were many rumors and allegations that reported just the opposite, however it seems that The Federal Reserve Bank bought $1.5 billion of Verizon's short term (90 days) commercial paper, funds for the purchase did not come from the TARP program. 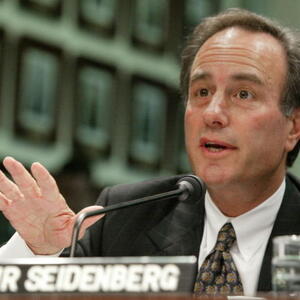