Indra Nooyi Net Worth and salary: Indra Nooyi is an Indian-born American business woman who has a net worth of $80 million. Indra Nooyi was born in Madras, Tamil Nadu, India in October 1955. Nooyi graduated from Madras Christian College and got her MBA from Indian Institute of Management Calcutta. She started her career in India and was a product manager at Johnson & Johnson and Mettur Beardsell. Indra earned her Master's degree at Yale School of Management. After graduating she joined the Boston Consulting Group before holding strategy positions at Motorola and Asea Brown Boveri. She joined PepsiCo in 1994 and became the CFO in 2001. She was behind their 1997 divestiture into Yum! Brands. She also took the lead in acquiring Tropicana in 1998 and merging with Quaker Oats Company which includes Gatorade. She became the fifth CEO of PepsiCo in 2006. In 2011 Nooyi earned $17 million including a base salary of $1.6 million. She has been ranked by Forbes magazine as fourth on its lists of The World's 100 Most Powerful Women. She has also been listed at #1 on Fortune magazine's list of Most Powerful Women in business from 2006 to 2010. In 2011, her she earned $17 million, with a base salary of $1.9 million. By 2014, her total compensation had grown to around $19 million. Between 2014 and her retirement in 2018, she earned $20-29 million per year depending on bonuses and other compensation. Indra Nooyi is married to Raj K. Nooyi and the couple has two daughters. On August 6, 2018, Indra Nooyi announced that she was stepping down as CEO. She will continue to serve as company Chairwoman until 2019. During her time as CEO, the price of Pepsi's stock has risen 80%. 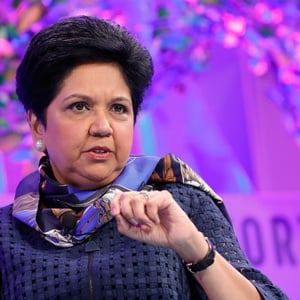