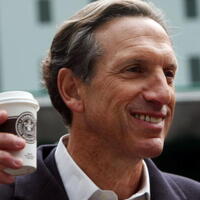 What is Howard Schultz's Net Worth?

Howard Schultz is an American billionaire entrepreneur who has a net worth of $3.5 billion. Howard Schultz is best known for serving as the CEO of the coffee chain Starbucks. He first held that position from 1986 to 2000, and then again from 2008 to 2017 and again in an interim capacity in 2022. Beyond Starbucks, Schultz owned the Seattle SuperSonics NBA franchise and publicly considered running in multiple US presidential elections.

Howard Schultz grew up in an extremely poor family. He proved to be an excellent athlete and subsequently received an athletic scholarship to Northern Michigan University. He graduated in the early 70s with a degree in Communications and began working for Xerox. He left Xerox to become a manager for a Swedish coffee manufacturer. While working there, he was introduced to a group of Seattle-based coffee makers that had started a company called Starbucks Coffee Company. He became their Director of Marketing. He suggested that they take their coffee company in the same direction as the coffee shops of Italy, but they were not interested in creating a "café-like" culture. He started his own coffee shop, Il Giornale, and ultimately bought Starbucks from the original owners.

He eventually grew the company to the massive empire it is today. As of this writing, Starbucks has a market capitalization north of $100 billion. In September 2013, Howard angered some gun owners by asking people to not bring guns into Starbucks locations. He is also a supporter of raising minimum wages. In June 2014, Schultz announced that every Starbucks employee will be able to take free online college classes from Arizona State.

Howard Schultz was born on July 19, 1953 in the Brooklyn borough of New York City to Jewish parents Elaine and Fred. Growing up poor, he was raised in the Canarsie public housing projects. Schultz attended the Boys' Club of New York as a youth, and went to Canarsie High School. Following his graduation in 1971, he attended Northern Michigan University. Schultz graduated from NMU in 1975 with a BA in communications.

Remaining in Michigan after graduating from college, Schultz took a job at a ski lodge for a year. Subsequently, he moved back to New York City and became a salesman for Xerox. Following that gig, Schultz was recruited by the Swedish kitchenware manufacturer Hammarplast to become the general manager of its American division. At the company, he was in charge of coffee machine manufacturing operations.

At the age of 29 in 1982, Schultz was hired by Starbucks as the director of marketing and retail operations. The next year, after coming back from a buying trip to Milan, Italy, he tried to persuade Starbucks owners Jerry Baldwin and Gordon Bowker to begin selling traditional espresso beverages in addition to the whole bean coffee and tea leaves the company was already offering. However, a number of economic and logistical factors prevented them from following through with the idea. Consequently, Schultz left Starbucks in 1985 to open his own store, which soon received $150,000 in investment money from Starbucks and $100,000 from local doctor Ron Margolis. By 1986, he had enough funding to open his first store, called Il Giornale. A couple of years later, the Starbucks management team – which had decided to focus on another venture called Peet's Coffee & Tea – sold its Starbucks retail unit to Schultz, who then rebranded Il Giornale with the Starbucks name.

After taking control of Starbucks, Schultz worked on expanding the company's reach throughout the United States. In the summer of 1992, Starbucks went public, raising $271 million. Schultz remained in the position of CEO until 2000, when he stepped down to become the company's chief global strategist. 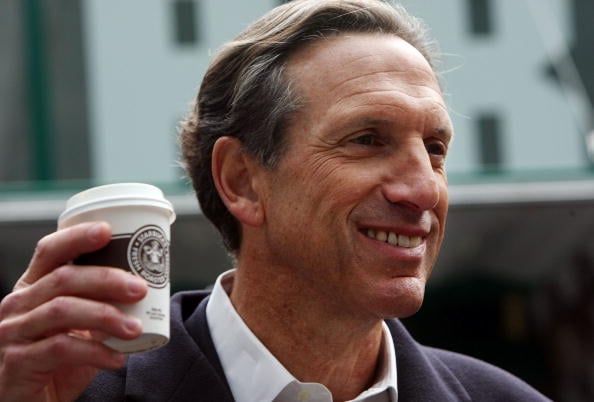 In the new millennium, Schultz worked to significantly expand the global market reach of Starbucks, with the company opening numerous stores in China. After serving as the chief global strategist for eight years, he returned in early 2008 to the position of CEO. During this time, Starbucks was being heavily criticized for its employee labor conditions and tipping policies. Schultz went on to oversee a mass-firing of executives and the shuttering of hundreds of Starbucks stores. He then enforced fair trade and ethical source policies, resulting in a doubling of the company's annual purchase of fair trade coffee. Later, in 2014, Schultz established the Starbucks College Achievement Plan in collaboration with Arizona State University. By the end of 2021, Starbucks had amassed over 33,000 stores in 80 countries around the world.

In December of 2016, Schultz again left his CEO post at Starbucks, and became executive chairman. A year-and-a-half later, he announced his retirement from active management of the company. However, Schultz returned as an interim CEO in March of 2022 after Kevin Johnson left the position.

Beyond his work at Starbucks, Schultz has been involved in the executive world of professional basketball. In early 2001, he led a group of investors in the purchase of the NBA's Seattle SuperSonics and the WNBA's Seattle Storm. During his ownership of the former team, Schultz was widely criticized for running the franchise more like a business than a team. In early 2006, he gave the Washington State Legislature an ultimatum that he would sell the SuperSonics if the state failed to approve the renovation of KeyArena or the development of a new arena for the team. Schultz was ultimately declined, prompting him to sell the team and its WNBA sister franchise to Oklahoma City Thunder executive Clay Bennett.

Schultz has penned a number of books on business. His first, "Pour Your Heart Into It: How Starbucks Built a Company One Cup at a Time," was co-written by Dori Jones Yang and published in 1997. His next book was 2011's "Onward: How Starbucks Fought for its Life Without Losing its Soul," co-written by Joanne Gordon. Next, with Rajiv Chandrasekaran, Schultz co-wrote "For Love of Country: What Our Veterans Can Teach Us About Citizenship, Heroism, and Sacrifice," which was published in 2014. His fourth book, a candidate memoir entitled "From the Ground Up: A Journey to Reimagine the Promise of America," came out in 2019.

A neoliberal technocrat, Schultz supports free trade, tax reform, gun control, and a balanced budget. He is notably anti-union, having cracked down on unionization at Starbucks since the 80s. Schultz is known to be a deficit hawk in terms of the economy, and a liberal hawk in terms of foreign affairs. He has publicly considered running for US president as a Democrat or independent in 2012, 2016, and 2020.

Among his other ventures, Schultz and investment banker Dan Levitan founded the venture capital firm Maveron in 1998. The group mostly invests in startups and consumer-focused companies. By the summer of 2014, Maveron was worth $1.3 billion in assets under management.

In 1982, Schultz wed Sheri Kersch. The couple has two children, and resides in the Madison Park neighborhood of Seattle. With his wife, Schultz co-founded the Schultz Family Foundation and Onward Veterans.