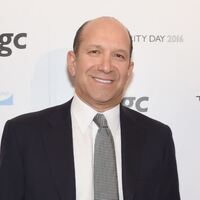 Howard Lutnick Net Worth: Howard Lutnick is an American businessman who has a net worth of $1 billion. Howard Lutnick was born July 14, 1961 in Jericho, Long Island, New York. After graduating from Haverford College (Haverford, Pennsylvania) in 1983 with a degree in economics, Lutnick went to work for Cantor Fitzgerald (a financial services firm headquartered in New York City, New York). When Howard Lutnick was 29 he was named second in command at Cantor Fitzgerald and a year later he became the president and CEO of Cantor (1991) and Chairman in 1996. On September 11, 2001, Cantor Fitzgerald lost 658 employees, including Lutnick's brother Gary, to the 9/11 terrorist attack on New York City. Lutnick was heartbroken and vowed to the families who lost loved ones that Cantor would take care of them. Cantor created Cantor Fitzgerald Relief Fund and Howard Lutnick donated $1 million of his personal money to the fund. In 2006, Cantor paid a total of $180 million to the affected families. After Hurricane Sandy, Lutnick also led Cantor to donate $10 million to New Yorkers who lived in the neighborhoods affected by Hurricane Sandy. Ever the philanthropist, Lutnick appeared on the Piers Morgan Live TV show and pledged $2 million to families affected by the Moore, Oklahoma tornado. The May 20, 2013 tornado killed 24 people and injured hundreds more. The donation was given out in the form of $1,000 debit cards to area families. Forward from the 9/11 attacks, each year on September 11, Cantor Fitzgerald and its affiliate BGC Partners donate 100% of their revenue to charitable causes on their annual Charity Day. Charity Day was originally established to raise money for the Cantor Fitzgerald Relief Fund to assist the families of Cantor employees who perished in the World Trade Center attacks. Since Charity Day's inception, the firm has raised $101 million for charities globally.