Howard Buffett net worth: Howard Buffett is the son of famous billionaire businessman Warren Buffett. Howard Buffett has a net worth of $400 million. In addition to his famous family net worth, Buffett has held the occupations in the fields of philanthropy, agriculture, and photography. From the years 1989 to 1992, Buffett served as County Commissioner in Douglas County, Nebraska. He has also served on the boards of directors of various organizations and corporations, including the Archer Daniels Midland Company, The GSI Group, and the Lindsay Corporation. One company that Buffett has served as a director for (and continues to now) has a little bit more name recognition than the others: The Coca-Cola Company. Not content to simply be an executive, Buffett has written several books on the subjects of the conserving the environment, as well as columns appearing in publications such as The Wall Street Journal and The Washington Post. As a humanitarian and philanthropist, Buffett has worked with and founded an impressive number of charitable organizations, including most notably the Howard G. Buffett Foundation, which travels to environmentally needy regions and works on achieving biodiversity, clean water, and other resources that are necessary to sustaining life there. Clearly, Howard G. Buffett has not been content to rest on his father's famous name and fortune. 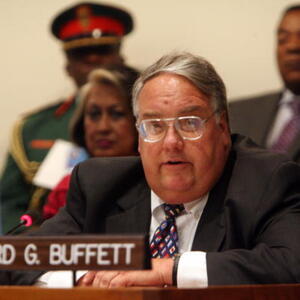