What was Henry Ford's Net Worth?

Henry Ford was an American entrepreneur who founded the Ford Motor Company. At the time of his death, Henry Ford had a net worth worth equal to $200 billion dollars adjusted for inflation. That makes him one of the wealthiest human beings who ever lived.

In the 1920s, Henry Ford controlled an estimated $1.2 billion in personal wealth. When a reporter once asked him to estimate his fortune, Henry replied:

Ford left most of his vast wealth to the Ford Foundation and arranged for his family to control the company permanently.

Henry Ford was a pioneering figure in the advent of the assembly line. Contrary to popular belief, Ford did not invent the automobile nor did he invent the assembly line, but he was the first to develop and manufacture an affordable automobile for middle class Americans. By achieving this, Ford converted the automobile from a relatively unknown invention into an innovation that profoundly impacted the landscape of the twentieth century. His Ford Model T automobile revolutionized American transportation, while his consumerist vision resulted in the franchise system of car dealerships.

As the owner of the Ford Motor Company, he became one of the richest and best-known people in the world. He was committed to lowering costs and creating a franchise system that put Ford dealerships throughout most of North America, and in major cities on six continents.

In 1891, he became an engineer with the Edison Illuminating Company. He was promoted to Chief Engineer in 1893, and had enough time and money to devote attention to his personal experiments on gasoline engines. He perfected these experiments and in 1896 completed a self-propelled vehicle that he named the Ford Quadricycle.

The Ford Motor Company was founded on June 16, 1903, with $28,000 in capital. The Model T was introduced by Ford Motor Company on October 1, 1908. It had the steering wheel on the left, which every other company soon replicated. The entire engine and transmission were enclosed; the four cylinders were cast in a solid block; and the suspension used two semi-elliptic springs. The car was very simple to drive, and easy and cheap to repair, which is what made it stand out from the other automobiles of its time. It was so inexpensive at $825 that everyday people could afford to buy them.

By 1918, half of all cars in America were Model T's. All new Model T's were black; as Ford wrote in his autobiography, "Any customer can have a car painted any color that he wants so long as it is black". This helped him create an efficient assembly line that paved the way for an affordable automobile. By the 1920s, a majority of American drivers had learned to drive on the Model T.

Throughout his career, Ford voiced his opposition to Labor Unions, authored some anti-Semitic books, and bought out his investors so his family could maintain sole ownership of the company. 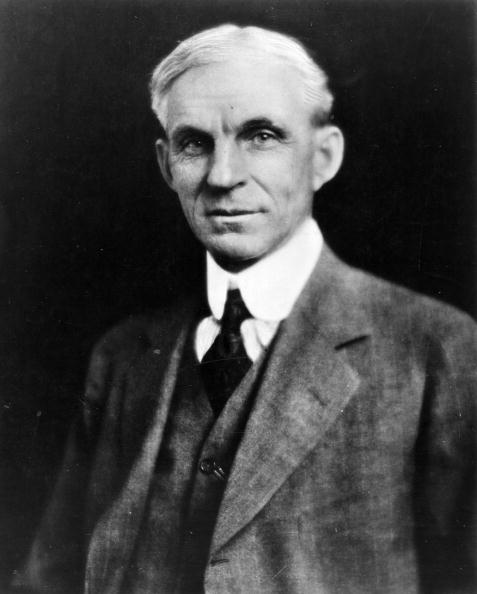 Henry Ford was born on July 30, 1863 on a farm in Springwells Township, Michigan to Mary and William. He was of Irish, English, and Belgian descent, and had four younger siblings named Margaret, Jane, William Jr., and Robert. Ford went to Springwells Middle School, a one-classroom school; after graduating, he never went to high school.

When his mother passed away in 1876, Ford bucked his family's expectations and left the farm to become an apprentice machinist in Detroit. He first worked for James F. Flower & Bros., and then with the Detroit Dry Dock Co. Ford returned to the farm in 1882, where he learned how to operate a Westinghouse portable steam engine; he went on to work for Westinghouse. Ford continued to cultivate his machine-building and -operating skills over the subsequent years, repairing an Otto engine in 1885 and building a four-cycle engine model in 1887. Later, he worked on a two-cylinder engine, and completed his first motor car.

In 1891, Ford joined the Edison Illuminating Company of Detroit as an engineer. Using his earnings, he spent time experimenting with gasoline engines. This eventually resulted in his 1896 Ford Quadricycle, his first self-propelled vehicle. Ford designed and constructed another vehicle in 1898. He subsequently resigned from the Edison Illuminating Company and founded the Detroit Automobile Company; however, his company failed to achieve success and was shuttered in early 1901. Later that year, Ford designed and built a 26-horsepower car with the help of engineer C. Harold Wills. He went on to form the Henry Ford Company, which he soon left.

With coal dealer Alexander Young Malcomson, Ford formed the partnership Ford & Malcomson to manufacture cars. However, they struggled with sales, and ran into trouble when their suppliers, John and Horace Dodge, demanded to be paid for their shipment. To resolve the situation, Malcomson brought in a group of investors and reincorporated Ford & Malcomson as the Ford Motor Company; he then gave the Dodge brothers a portion of the company. In 1908, Ford debuted its flagship product, the Model T. Featuring a left-side steering wheel, enclosed engine and transmission, and semi-elliptic spring suspension, the car quickly revolutionized American transportation. Cheap and easy to drive, the Model T soon became the most popular automobile in the nation. To boost sales, Ford launched a massive publicity campaign with ads in every newspaper.

In 1913, Ford helped further revolutionize American industry with his introduction of the assembly line, which permitted a major increase in production. By 1918, half of all automobiles in the US were Model Ts. However, trouble was on the horizon, as General Motors was working its way up to becoming the leading car manufacturer in the country. By 1926, the popularity of the Model T was fading, prompting Ford to create a new model: the Model A. Despite resisting many of the day's automobile innovations, in 1932, Ford introduced the flathead Ford V8, the first affordable eight-cylinder engine.

Notably, Ford was a pioneer of welfare capitalism. In 1914, he offered an unheard-of $5-per-day wage, which amounts to $140 today. He also introduced a reduced workweek in 1926 that inaugurated the modern 9-to-5 schedule. Despite these efforts to attend to employee welfare, Ford was emphatically anti-union. To thwart union organizing, he assigned former Navy boxer Harry Bennett as the head of the service department; Bennett was known to use myriad intimidation tactics in this position. Numerous sociopolitical flare-ups ensued, including a protest by unemployed Detroit auto workers that was fired upon by police and Ford security guards.

During World War I, Ford ventured into the aviation industry as a manufacturer of Liberty engines. The company continued in this line of work after the war, and in 1925, acquired the Stout Metal Airplane Company. Ford had its most successful aircraft with the 4AT Trimotor, which used a new, corrosion-resistance alloy known as Alclad.

Ford was a vehement anti-Semite, and perpetuated conspiracy theories that blamed Jewish people for social ills and various historical atrocities. He promulgated much of his anti-Semitism through his newspaper, "The Dearborn Independent," which ran from 1920 until 1927. Notably, Ford was the only American praised by Hitler in the dictator's manifesto "Mein Kampf"; he also received the Grand Cross of the German Eagle, the highest medal awarded to a foreigner in Nazi Germany.

In 1888, Ford wed Clara Jane Bryant. The couple had one child named Edsel, who passed away from cancer in 1943.

Following a series of strokes, as well as questionable mental fitness and the loss of his son, Ford was losing control of his company by the early 40s. Approaching bankruptcy, he was ordered by his wife and daughter-in-law to relinquish control of the company to his grandson Henry II. Ford relented, as the pair had threatened to sell all their stock if he declined; in 1945, he officially retired.

In 1947, Ford passed away at his estate in Dearborn, Michigan from a cerebral hemorrhage. He was 83 years of age.