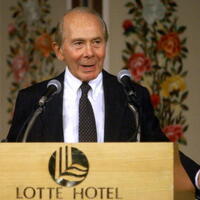 Hank Greenberg net worth: Maurice "Hank" Greenberg is an American businessman who has a net worth of $50 million dollars. Hank Greenberg was born in Chicago, Illinois and served in the U.S. Amry during WW II and the Korean War. He graduated from the University of Miami with a degree in Pre-Law, and then went on to earn his law degree from New York Law School. He became the Vice President of C.V. Starr & Co., Inc. in 1960, and was subsequently named the Head of North American holdings for AIG. He became President of American Home Assurance Company in 1962. In 1968, he became CEO of AIG, replacing Cornelius Vander Starr, and also became the Chairman of the Board of Directors for C.V. Starr & Co. Inc. He held the position of CEO of AIG, until his position was terminated amidst scandal in 2005. As most of us know by now, 2008 brought even more scandal for AIG when the world economy collapsed. In September 2008, the United States government was forced to rescue the flailing AIG through an $85 billion bailout. The government essentially purchased an 80% stake in AIG then proceeded to sell off the company's most valuable assets. Hank Greenberg owned 13 million shares in the insurance giant. At the peak of AIG's success in December 2007, those shares were worth $1.1 billion dollars. At the time the government bailed out AIG, his stake was worth just $25 million. OUCH.