Ginni Rometty net worth and salary: Ginni Rometty is an American business executive who has a net worth of $90 million. Ginni Rometty was born in Chicago, Illinois in July 1957. She serves as the chair, president, and CEO of IBM. Rometty became the first woman to head the company and graduated from Northwestern University. She has an annual salary of $32.7 million. She joined the company in 1981 as a systems engineer before working her way up to head global sales, marketing, and strategy. She has been named to Bloomberg's 50 Most Influential People in the World as well as Time's 20 Most Important People in Tech, Fortune's 50 Most Powerful Women in Business, and Forbes' America's Top 50 Women in Tech. Ginni Rometty has presided over 24 consecutive quarters of declining revenue and has been criticized but she has focused on areas including cloud computing, analytics, and cognitive computing systems during her tenure.

Ginni Rometty Stock Holdings: As of late 2018, Ginni is the largest individual shareholder in IBM. She holds 206,000 shares directly and another 96,000 restricted stock units. As of late 2018 those shares are worth a total of $33.2 million. 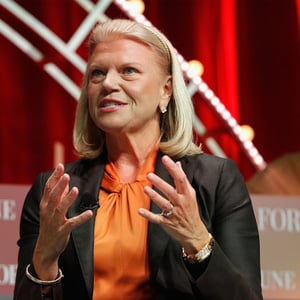