What was Gianni Versace's net worth?

Gianni Versace was an Italian fashion designer who had a net worth of $1 billion at the time of his death in 1997. He opened the first boutique in Milan's Via della Spiga in 1978. As his popularity among fashionistas grew, he became popular with some of the most famous people in the world, including Diana, Princess of Wales, Madonna, Elton John, Cher, Sting among many others. Tragically, Gianni Versace was shot to death in front of his Miami mansion by spree killer Andrew Cunanan in 1997.

Following Versace's horrible murder, his growing fashion empire was taken over by his brother Santo Versace and Gianni's partner Jorge Saud, who became the new CEOs of the Versace holding company. His sister Donatella took charge of the design department. Under Donatella, business slowed. Sales fell off. Her design sensibilities were quite different from her brother's. At one point the value of the Versace brand sunk as low as $400 million.

Upon his death, Gianni left a 50% stake in his company to his niece Allegra Versace who was 11 years old at the time. His brother Santo inherited 30% and Donatella inherited the remaining 20%. In 2014, Versace sold a 20% stake in the firm to private equity firm Blackstone. The investment valued Versace at roughly $1.4 billion. On September 25, 2018, Michael Kors Holdings announced it had struck a deal to acquire Versace for $2.2 billion.

Versace was born on December 2, 1946 in Reggio Calabria, Italy. He was exposed to fashion at a young age, as his mother, Francesca, was a dressmaker. He had an older brother, Santo, as well as two sisters, the younger Donatella, and the older Tina who died at age 12 from tetanus.

Versace attended school at Liceo Classico Tommaso Campanella, where he studied Latin and Greek and took an interest in ancient Greek history before beginning his apprenticeship with his mother's sewing business. There he learned all of the basics of making clothing and worked alongside a dozen other seamstresses.

He decided to pursue fashion as a career and moved to Milan at the age of 26 where he started working as a designer at the ready-to-wear brand, Genny. There, he was the designer of "Byblos," a youthful line, as well as "Complice," an experimental line, and experienced success in the role.

In 1978, Versace opened his first boutique in Milan's Via della Spiga following a successful fashion show that featured his first signature collection. His vivid and bold designs attracted attention quickly, as they were in stark contrast to the neutral and simple designs that were considered to be in style. For the company's logo, he chose an image of the Greek mythological figure Medusa, who was able to make people fall in love with her. Versace hoped his clothing would have a similar effect on people. He quicky began assembling his fashion empire by employing both his siblings. Sister Donatella became the vice president and creative director and brother Santo the president of the Versace company.

One of Versace's most notable fashion innovations was a material called Oroton, which was a sort of very light chainmail that he used in many of his clothing designs. His experience working in his mother's seamstress business also influenced his designs, as he generally cut clothing in a very feminine style, even for men's suits.

A few years after beginning the company in 1982, Versace further expanded his empire into producing textiles, house furnishings, and jewelry. In 1989, he further elevated the brand by launching Atelier Versace, which produced exclusively haute couture designs. He is also largely credited with launching the idea of the supermodel, as he helped discover models like Christy Turlington, Linda Evangelista, and Naomi Campbell. In addition to models, his marketing campaigns would also often feature celebrities, many of whom he befriended and would invite to his fashion shows. 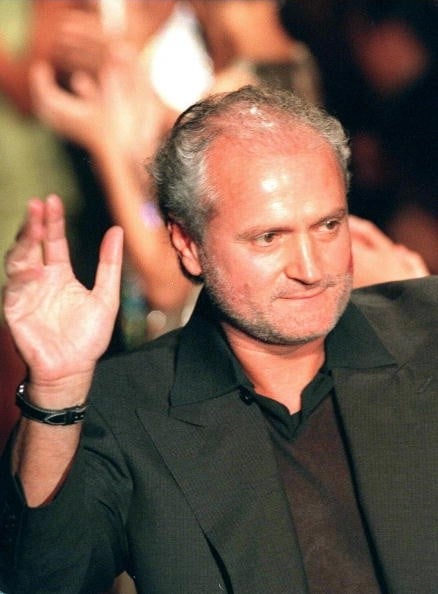 In addition to producing his own designs for the Versace brand, Versace was also very interested in costume design for the theatre and stage. He was well-suited to this task, considering his love for color and drama in clothing. He worked closely with the La Scala Theatre Ballet in Milan, designing costumes for several of the ballets performed by the company. Throughout the 1980s, he also designed costumes for five Béjart Ballet productions and then worked with the San Francisco Opera in 1990 to design costumes for "Capriccio." He also worked with a number of popular music performers, designing the wardrobes for Michael Jackson, Paul McCartney, and Elton John on various tours.

Until the time of his death, Versace maintained complete creative control over all the different branches of his fashion empire, which was quite unique. He had opened 130 boutiques all around the world and the Versace brand was valued at over $807 million.

The brand was pursuing an Initial Public Offering that was predicted to value the company at several billion dollars. The IPO was canceled soon after his death and the future of the brand was uncertain. It went through a temporary slow period before regaining in popularity.

As we mentioned previously, in 2014, Versace sold a minority stake in itself to private equity firm Blackstone. The investment valued Versace at roughly $1.4 billion. On September 25, 2018, Michael Kors Holdings announced it had struck a deal to acquire Versace for $2.2 billion.

As Versace become more and more popular, he developed a large circle of celebrity friends and enjoyed an active social life, attending many parties around the world. In 1982, he met model Antonio D'Amico, with whom he began a long-term relationship. While he did not have children of his own, Versace was a devoted uncle. His brother Santo had two children, Francesca and Antonio and his sister Donatella had two as well, Allegra and Daniel.

In July of 1997, at the age of 50, Versace decided to walk from his home in Miami Beach to get the morning paper, a task usually reserved for his assistant. While walking back up the starts of his mansion, he was shot at point-black range in the head and pronounced dead at the hospital shortly after.

The shooter was Andrew Cunanan, a serial killer who had already killed four other men. Cunanan was said to have been obsessed with Versace, claiming that the two were close friends, which Versace's family continues to deny. However reports did later surface that the two had met one night at a San Francisco nightclub and potentially could have met on later occasions as well, though the nature of their meeting still remains largely a mystery. Cunanan committed suicide eight days after he killed Versace.

Versace was cremated and then buried in a family vault near Lake Como in Italy. His funeral was held in the Milan Cathedral and was attended by over 2,000 people, including Elton John and Diana, Princess of Wales.

New York City: In 1995 Gianni Versace paid $7.5 million for a 17-room New York City townhouse. The six-floor home has 14,000 square-feet of living space. The home's fifth floor has a game room and media room. In 2005 the Versace family sold the mansion to a Swedish hedge fund manager for $30 million. That hedge fund manager offered the home for sale in April 2022 for $70 million. Below is a video from the 2022 listing:

Miami: Obviously, Gianni Versace's most famous piece of real estate was his Miami mansion. Gianna was murdered on the steps of this mansion on July 15, 1997. Gianna bought his Miami mansion in 1992 for $2.95 million. He proceeded to perform a major renovation, converting it from a hotel back to a private residence. A year later he paid $3.7 million for the Revere Hotel immediately next door. He tore this property down to make a pool and garden area. Business Telecom founder Peter Loftin bought the home in 2000 from the Versace estate for $19 million. Peter re-re-converted the property back into a hotel/restaurant/event space. In 2013 the property was purchased by a Florida-based hotel firm. Today the home is a luxury hotel called The Villa Casa Casuarina.