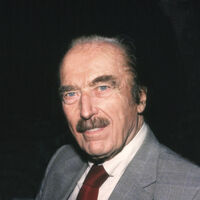 What was Fred Trump's net worth?

Fred Trump was an American real estate developer who had a net worth equal to $200-300 million at the time of his death in 1999. That's the same as around $300-$450 million today after adjusting for inflation. Trump's net worth was estimated at $200 million in 1982, which is the same as around $500 million today. Fred was the father of Donald Trump. Fred co-founded the real estate development company E. Trump & Son with his mother, Elizabeth Christ Trump, in 1927. The company later came to be known as the Fred Trump Organization, and now it is called The Trump Organization.

Fred was investigated for profiteering by a U.S. Senate committee as well as the State of New York, and after Donald became president of The Trump Organization, the U.S. Justice Department's Civil Rights Division filed a lawsuit against the organization in 1973 for violating the Fair Housing Act.

Trump was diagnosed with "mild senile dementia" in 1991, and he began suffering from Alzheimer's disease two years later. He died of pneumonia in June 1999.

A 2018 "New York Times" exposé reported that Fred and his wife, Mary, gave their progeny over $1 billion (in 2018's currency) and evaded more than $500 million in gift taxes. Fred illicitly gave Donald millions of dollars between 1987 and 1991, and in 1997, he transferred most of his apartment buildings to his children. The buildings were worth $41.4 million at the time, and they were later sold for $737.9 million.

Fred Trump was born Frederick Christ Trump on October 11, 1905, in New York City. He was the son of Frederick (born Friedrich) Trump and Elizabeth Christ Trump, and he had two siblings, Elizabeth and John. Both of Trump's parents were German-American, and his father was a businessman who ran a restaurant for miners during the Klondike Gold Rush and later began buying real estate. Fred and his siblings grew up speaking German, and when he was 10 years old, he took a job as a delivery boy for a butcher. Trump attended Richmond Hill High School while working several jobs, such as caddy and newspaper hawker. Frederick died of the Spanish flu during the 1918 flu pandemic, and Elizabeth began managing his real estate business. Fred was interested in a career as a builder, and he built a garage for one of the family's neighbors and took correspondence courses on masonry, plumbing, and electrical wiring. After he graduated in early 1923, Trump found work pulling lumber to construction sites, and he later became a carpenter's assistant. In 1924, Fred built and sold his first house, which his mother lent him $800 to build. Within two years, Trump had built 20 houses, and he was able to finance some of the homes by selling others before he finished building them. His mother held Fred's business, E. Trump & Son, in her name because when he started it, he hadn't yet reached the age of majority. 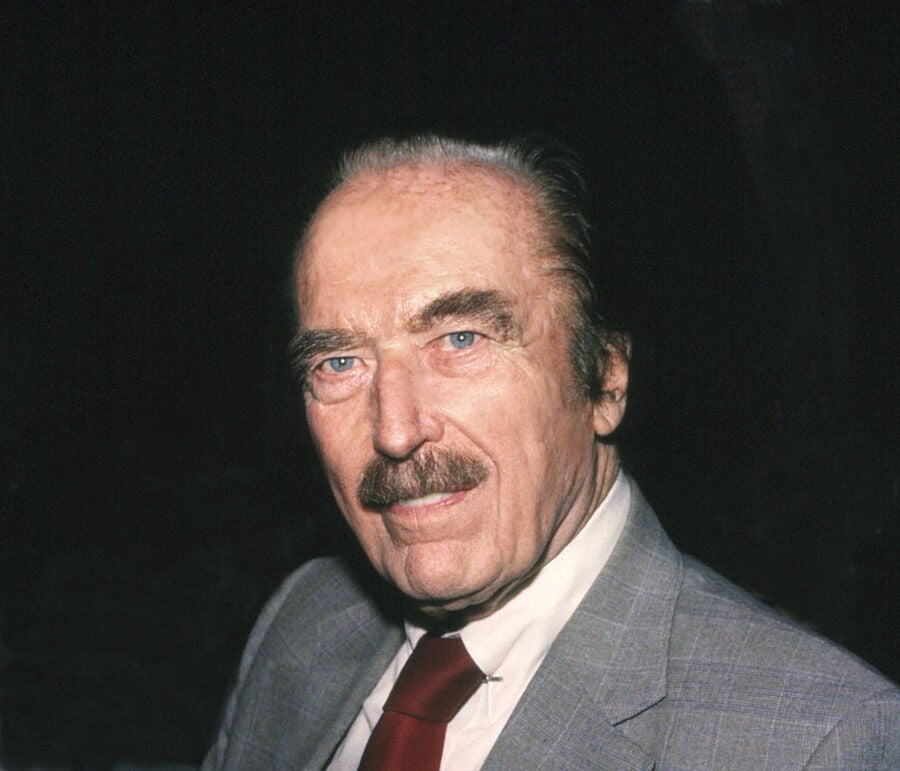 E. Trump & Son was incorporated in 1927, and in 1933, Fred built Trump Market, one of NYC's first modern grocery stores. Six months later, he sold Trump Market to King Kullen, the self-service grocery chain he had modeled the store on. In 1934, Fred and a business partner acquired J. Lehrenkrauss & Sons' mortgage-servicing subsidiary in federal court, which gave him access to property titles that were nearing foreclosure. He purchased the properties at a low cost and sold them at a profit. Fred took advantage of Federal Housing Administration loan subsidies after President Franklin D. Roosevelt launched the program in 1934. By 1936, 400 workers were digging foundations for homes that Trump would sell for at least $3,000. In the late '30s, he advertised his business on the yacht the Trump Show Boat, blaring patriotic music and offering swordfish-shaped balloons that potential buyers could use for a discount on one of his properties. In 1938, Fred was called the "Henry Ford of the home building industry" by the "Brooklyn Daily Eagle." During World War II, he built garden apartments and barracks for U.S. Navy members near East Coast shipyards, then he began building houses for the families of veterans returning home from war.

In the late '40s, Trump built Shore Haven in Brooklyn, and it included more than 30 six-story buildings as well as a shopping center. In 1950, he built Beach Haven Apartments, which included 23 buildings, near Coney Island. In 1964, he completed construction on Trump Village, a $70 million Coney Island apartment complex. Fred also built over 27,000 row houses and low-income apartments in New York. In 1954, Fred was featured on a "New York Times" list of 35 city builders who had been accused of profiteering off of government contracts, and he was investigated for windfall gains by a U.S. Senate banking committee. In 1966, the New York State Investigation Commission investigated him for windfall profiteering, but he was not indicted. In the early '70s, Donald Trump became president of the company, and Fred became chairman of the board. Around this time, the Urban League and the New York City Commission on Human Rights discovered that minority applicants were being turned away from Trump apartments, leading the U.S. Department of Justice's Civil Rights Division to file a lawsuit against The Trump Organization. Several people who had worked with the company testified about the racist practices they witnessed, with one rental agent saying that Fred instructed him "not to rent to blacks" and to "get rid of the of blacks that were in the building by telling them cheap housing was available for them at only $500 down payment." The Trump Organization and the Department of Justice signed a consent decree in 1975 that prohibited the company from "discriminating against any person in the … sale or rental of a dwelling." 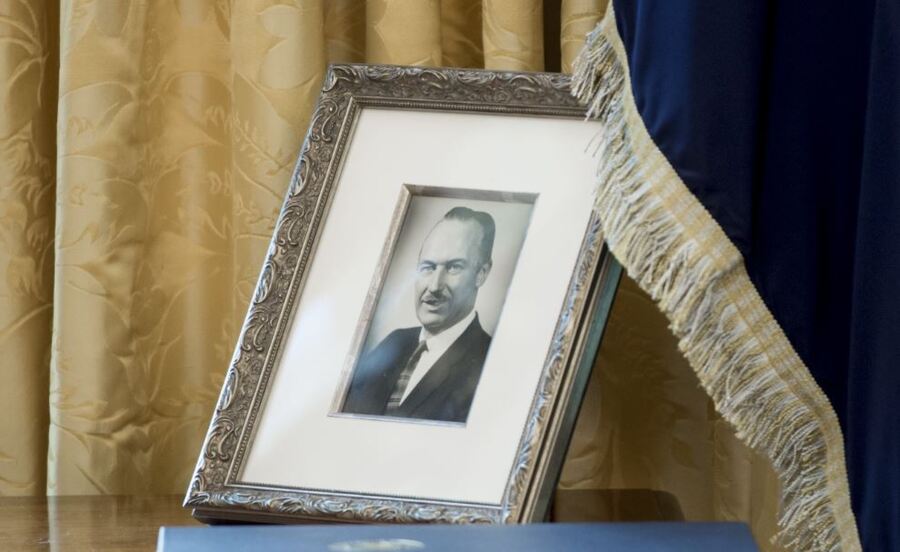 In 1927, Trump and several other men were arrested at a Ku Klux Klan rally and were referred to as "berobed marchers" in a Long Island newspaper. He was arrested for "refusing to disperse from a parade when ordered to do so," and the charge was later dismissed. In the mid-1930s, Fred met Scottish immigrant Mary Anne MacLeod at a dance party, and they married on January 11, 1936, at NYC's Madison Avenue Presbyterian Church and honeymooned in Atlantic City for one night. The couple had five children together, Maryanne (born 1937), Fred Jr. (born 1938), Elizabeth (born 1942), Donald (born 1946), and Robert (born 1948). Fred Jr. died in 1981, and Robert passed away in 2020. Trump was a strict father who forbade his children from wearing lipstick, snacking, and cursing. His sons had paper routes, and when the weather was bad, he would let them do the job from a limo. After Elizabeth's birth, the family moved to Virginia Beach, Virginia, but they returned to Queens in 1944. Within two years, the family was living in a five-bedroom home Fred built in Jamaica Estates, and he bought the neighboring lot and built a 23-room mansion.

Fred and Mary donated buildings to the Jamaica Hospital Medical Center, United Cerebral Palsy, and the National Kidney Foundation, and Trump was a trustee of the Jamaica Hospital Medical Center. He was a supporter of Manhattan's Hospital for Special Surgery and the Long Island Jewish Hospital as well as charitable organizations such as The Salvation Army and the Lighthouse for the Blind. Fred was a member of the board of directors at the Kew-Forest School, which his children attended, and he donated land for Flatbush's Beach Haven Jewish Center.

Fred Trump passed away on June 25, 1999, at the age of 93 after being admitted to Long Island Jewish Medical Center with pneumonia. Fred's funeral took place at Manhattan's Marble Collegiate Church, and more than 600 mourners attended the service. He was laid to rest at Lutheran All Faiths Cemetery in a family plot.

In 1976, Fred established $1 million trust funds for each of his five children and three grandchildren who were alive at that point. The trusts also received annual dividends from the profits produced by Fred's real estate empire.

Fast forward to 1993 and each of those trust funds controlled $35 million.

Upon his death, after taxes each of Trump's children received $20 million. According to a 2018 "New York Times" report, trust funds established by Fred in the 1960s technically made each of his children, including Donald, a millionaire before they were teenagers. The exposé claimed that Donald ultimately received $400 million (after adjusting for inflation) from the Fred Trump business empire during his lifetime. That amount includes a reported $60 million in loans to Donald that were never repaid. Fred's widow, Mary, died in August 2000, and at that time, their combined estate was valued at nearly $52 million.

Fred Jr.'s children contested Fred's will due to his dementia and alleged that it was "procured by fraud and undue influence" by Donald, Robert, and Maryanne, who had claimed that their father was "sharp as a tack" until shortly before his death. Donald denied having any knowledge of his father's dementia diagnosis, and Maryanne later came clean and privately admitted that she was aware that Fred had dementia. Fred Jr.'s daughter, Mary, said that toward the end of her grandfather's life, he forgot people he'd known for years, including her, and in 2020, she sued Donald and Maryanne as well as Robert's estate for taking part in "a complex scheme to siphon funds away from her interests, conceal their grift, and deceive her about the true value of what she had inherited."