Fred Smith Net Worth: Fred Smith is an American CEO and entrepreneur who has a net worth of $3.9 billion dollars. Born in Marks, Mississippi, in 1944, Fred Smith grew up battling a bone disease until he was ten years old. Within five years of becoming healthy, he was a star football player in his local community and learned to fly as an amateur pilot.

He attended Yale University, where he wrote a mediocrely received economics paper that would later serve as the idea that inspired his global brand, FedEx. He graduated Yale in 1966 as a fraternity brother of future President George W. Bush. He spent three years in the U.S. Marine Corps before his honorable discharge in 1969. The decorated veteran earned two Purple Hearts, a Silver Star and a Bronze Star while in the service. Two years later, Smith took his inheritance and some investment money and founded Federal Express. By 1973, the business serviced 25 U.S. cities with fourteen jets. The early years were tough for the company, and Smith reportedly took the business' dwindling back account to Vegas, where he was able to earn enough to pay the bills in blackjack. Headquartered in Memphis, Tennessee, FedEx is today one of the biggest overnight express delivery companies in the world. Smith is the co-owner of the NFL's Washington Redskins, has worked on the board for companies such as the Mayo Foundation and St. Jude Children's Research Hospital, and was inducted into the Aviation Hall of Fame. Though apparently offered a job as U.S. Defense Secretary upon Bush's election, Smith declined. He was part of the list of the World's 50 Greatest Leaders by "Fortune Magazine" in early 2014. He has battled several legal issues, including a forgery indictment and involvement in a deadly hit-and-run. Smith married his first wife, Linda Black, in 1969, and they divorced in 1977. He and his second wife, Dianne Avis, have eight children together. 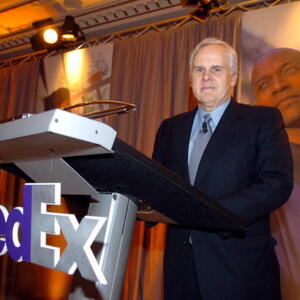