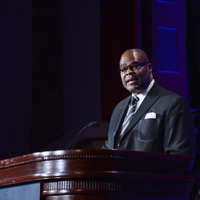 Donald Thompson net worth and salary: Donald Thompson is an American business executive who has a net worth of $20 million dollars. Donald Thompson was born in Chicago, Illinois, and grew up near the Cabrini-Green housing projects. He went on to graduate from Purdue University with a degree in Electrical Engineering. He worked for a number of years building jet fighters. He was then hired to design robotic equipment and better control circuits, for McDonald's, in 1990. He went on to work his way up the ladder at McDonald's over the course of the next 20 years, later serving as Regional Vice President, Division President, and Chief Operating Officer. From 2006-2010, he served as President of McDonald's USA. In 2010, he became President and COO of McDonald's Corporation, and in 2012, he was appointed President and CEO. He has been honored with numerous leadership and business awards, and received an honorary doctorate from Excelsior College.