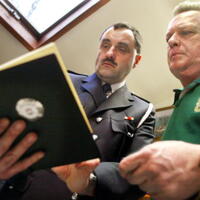 Don McCarthy Net Worth: Don McCarthy is a British entrepreneur who has a net worth of $240 million. He accumulated his wealth in the retail industry by making bankable investments in a string of well-known chains. Today, he serves as the chairman of the House of Fraser, a British department store group with more than 60 stores across the UK and Ireland. He is also a shareholder in the group, which hit the headlines in April 2014 when it was reported that 89% of House of Fraser would be purchased by the Chinese conglomerate Sanpower for around £450 million. Aside from House of Fraser, Mr McCarthy is an ex-boss of Shoe Studio Group and one-time chairman of Aurum, the jewelry retailer which owns Mappin & Webb and Goldsmiths. Furthermore, he held some other retailers that he sold to Baugur, the Icelandic investor which failed to make it through the financial crisis.